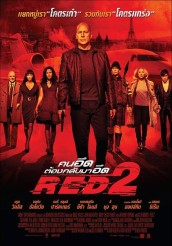 The story is conventional, but Helen Mirren and Byung Hun Lee are separately spectacular

One of the main thoughts one has while watching RED 2 is that Helen Mirren is awesome. This isn’t exactly news, but every moment she’s onscreen here, firing two guns simultaneously as if she’s in a Quentin Tarantino shoot-‘em-up with an expression that says, yes, this is going just as she expects it will, no reason for anyone to get overly excited, or briskly and desperately engaged in physical conflict, or even sending herself up, Mirren is so absolutely watchable that we have to appreciate the framework that allows her to do these things.

It’s not that RED 2 – the sequel to 2010’s RED, based on a graphic novel created by Warren Ellis and Cully Hamner – doesn’t have a decent storyline as spy action thrillers go. “RED” in these films stands for “Retired: Extremely Dangerous,” which certainly still describes former CIA operative Frank Moses (Bruce Willis), his buddy Marvin (John Malkovich), their ex-MI6 pal Victoria (Mirren) and even Victoria’s boyfriend, old KGB spy Ivan (Brian Cox). Frank keeps trying to settle down with civilian girlfriend Sarah (Mary-Louise Parker), but it’s not easy, what with Sarah eager for a mission and then somebody actually trying to kill them.

Frank and Marvin find themselves framed as nuclear terrorists, and the only way to clear their names seems to be to track down an eccentric but brilliant scientist from their shared past, Dr. Bailey (Anthony Hopkins). The trail leads all over the globe, with a shadowy, sadistic government enforcer (Neal McDonough) and an irate Korean assassin (Byung Hun Lee) both in hot pursuit.

A word here about Lee – he is a major star in Korea, and RED 2 amply demonstrates why. Between his martial arts skills, charm and air of cool touched with slight surprise, he’s almost as engaging as Mirren.Hopkins is likewise engaging as the possibly daft doctor.

The script by Jon Hoeber & Erich Hoeber, who also wrote the original RED, has a solid if never quite breathtaking plot that allows for the requisite moments of comedy and action, although (at the risk of harping on it) the character who reaps the most from being continually underestimated is Victoria. Willis is still out there playing badass in other roles and Malkovich as Marvin comes off as fairly scary, so there isn’t as much kick in seeing them in the thick of things – the actors are still so entrenched in the action genre that it seems business as usual for them to be there. Willis also appears to be trying just a little too hard with Frank’s obtuseness regarding Sarah. The writers seem like they’re not quite sure what to do with Sarah, but Parker does a good job of making her coherent and has a fine, fun scene opposite David Thewlis, who plays a font of information.

Director Dean Parisot stages the multiple fights, gun battles, car chases and other set pieces with a sense of excitement, and pays homage to the project’s roots by tying sequences together with comic-book style panels

RED 2 is unlikely to blow anyone’s mind, but most of it is highly enjoyable, with enough moving parts to keep everyone entertained and invigorated. Besides, it’s worth it just for Mirren and Lee.