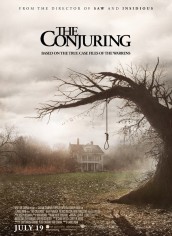 A lot of scares and a stubbornly mood-draining subplot

THE CONJURING is a bit of an oddity. It is undeniably scary, yet takes what feels like a lot of time out to do some very on-the-nose bits about faith and marriage. It’s a bit like if THE EXORCIST was remade by one of those “this is good for you” religious TV channels.

Ed and Lorraine Warren (played here by Patrick Wilson and Vera Farmiga, respectively) were a real-life married couple who investigated paranormal phenomena. (They were involved in the Amityville case.) A crawl at the beginning of the film informs us that the events in THE CONJURING were considered “too malevolent” to be released to the public until now.

Let’s take a moment. Granted, a lot of people at the multiplex may think, “Wow, scary.” People who parse credits may note that Chad Hayes & Carey W. Hayes receive a “written by” title, with no source material cited, though Lorraine Warren is credited at the end as a consultant. Other, cynical people may think – especially by the end of the film, when nothing has transpired that we haven’t seen before in a haunted house story – that it’s being released to the public now because this is when the movie got funded, rather than because the world is now ready to hear the tale.

It’s 1971 and the Perron family – truck driver dad Roger (Ron Livingston), loving mom Carolyn (Lili Taylor) and their five young daughters – move into their recently-purchased old home. Almost immediately, things start going bump in the night. Their dog is killed (imagine a rant here about this horror movie trope and let’s move on), one girl resumes sleepwalking, another makes an imaginary friend, another sees a figure in the shadows behind the door. Finally, things escalate to the point where Carolyn approaches the Warrens for help. Ed feels that Lorraine is still recovering from a previous investigation and doesn’t want her involved, but Lorraine is sure that God’s purpose for their marriage is for the two of them to jointly help those who are afflicted.

Director James Wan and star Wilson previously collaborated on INSIDIOUS, and there is no question that Wan knows both how to build tension and how to stage a jump scare. There are a couple moments guaranteed to make all but the hardiest filmgoers yelp, and plenty of unnerving sequences. There’s also great use of creepy props, including a doll called Annabelle who features prominently in the prologue and returns thereafter.

The actors throw themselves into the situations soberly and intensely; nobody is playing this tongue in cheek.Taylor deserves special commendation for going through what appear to be some especially strenuous scenes.

So what’s the problem? We get the back story of what’s going on in the house, and it sounds more like something cooked up to unnerve impressionable young campers than anything with psychological heft. Still, the haunting itself delivers the goods, so this isn’t too distracting. However, Ed’s concern about Lorraine being fragile after a previous incident never pays off, as we don’t find out what the earlier case was and it doesn’t appear to have any effect on the present situation. Furthermore, there are a series of scenes in which Ed frets about Lorraine’s well-being, Lorraine insists she’s fine, God wants them to work together and Ed capitulates. One of these scenes would be fine, but having more than one with extremely similar dialogue seems intended to make sure that we understand that God is on the side of the Warrens. People will believe this or not, but reiterating it doesn’t make the point more strongly. Having such gosh-darn nice people in the story tends to detract from the sinister mood.

On balance, though, THE CONJURING is an effective horror tale, with a couple of gut-punch moments, and that’s more than can be said of many other genre offerings.