Home » one direction this is us movie review 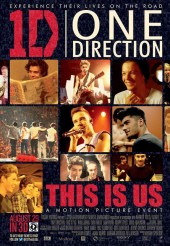 ©2013 Sony Pictures
ONE DIRECTION: THIS IS US movie poster
Reviews

Movie Review: ONE DIRECTION: THIS IS US

A backstage look at The Phenom Five - One Direction

There’s no question that the degree as to how much you enjoy the film ONE DIRECTION: THIS IS US is directly correlated to how much you like/love the boy band. That’s a given. So, that being said I took my niece who adores Niall, Harry, Liam, Louis and Zayn and my daughter who somewhat stomachs them to see a screening of their concert-documentary film surprisingly directed by Morgan Spurlock. Yes, that Morgan Spurlock of SUPER SIZE ME fame.
Now, granted for my niece the boys could have just stared out into the camera for an hour and a half and she would of thought it was the best thing she had ever seen. My daughter, on the other hand, got somewhat bored three quarters of the way through. I was indifferent about the film to begin with. I am too old to be that interested in the subject matter, or the film for that matter, and yet I found some enjoyment and a few interesting moments to keep me entertained for most of the 90 minutes running time. Still, after I got the schtick of the thing – the boys are not unlike frat brothers sent off to college together to earn their musical “degrees,” I was done.  Styles says it best when he is in a recording booth, “I smell man boys.”
That pretty much entails the entire duration of ONE DIRECTION: THIS IS US. They are silly, goofy late teen/early twenty somethings still learning about life who are thrown into this unexpected phenomenon within the last three years of their lives. I can’t even begin to imagine how crazy that must be for them. And I guess that’s what I wanted to see, exactly how has this changed and affected the boys. There is less than 10 minutes of their individual back stories sprinkled in between an abundance of them goofing off, dressing up, singing in concert and airport arrival footage in various countries including France, Italy, Germany and Mexico.
Now, all the mates seem to get along very well and that’s nice to see and yes they all seem to have hilarious senses of humor. But don’t count on getting any deeper than that. This is a very superficial frills-based spectacle for the 1D fans to swoon over and for the producers to make a pretty penny off of those young Directioners. Making it 3D only ups the costs of the tickets unnecessarily. Still, my niece loved it, exclaiming how she can’t wait to see it again, my daughter was amused up to a point and I, well, let’s just say it would have made a fine 30 minute special on TV.

Article Source: Assignment X
Article: Movie Review: ONE DIRECTION: THIS IS US