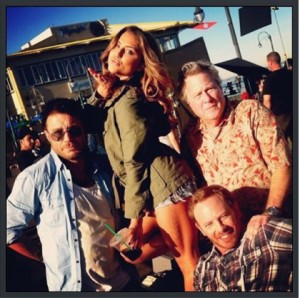 In SHARKNADO, Syfy Channel’s descriptively-titled movie about a tornado that deposits sharks and flooding all over Los Angeles, Jaason Simmons plays Baz, who helps Ian Ziering’s character Fin search for his wife and family during the catastrophe. Simmons is no stranger to water – he played lifeguard Logan Fowler for forty-eight episodes of BAYWATCH – and he’s also done horror (THE DEVIL’S TATTOO, BLOODY MARY), but he says SHARKNADO is a first for him on many fronts.

JAASON SIMMONS: I’ve never played a light character before. People are always casting me as rapists. This is the first time I’ve ever been a sidekick and a funny guy. It was so much fun.

AX: Why did you add the extra “a” to your first name?

SIMMONS: First of all, I was a stutterer as a kid, so that was the joke part of it. Second of all, there were eight Jasons in my class. And when I went to join SAG, there was already a Jason Simmons, so I used my grandfather’s spelling. My grandfather – they came from Poland and went to Austria. So I used the way that he would spell my name and kept it like that.

AX: You’re originally from Tasmania. How did you wind up in Los Angeles?

SIMMONS: When I was twenty years old, I came to study with an acting teacher called Sanford Meisner. I was halfway through his course and then started booking jobs. And then when I quit BAYWATCH, I went back and I finished my theatre training and then went to London.

AX: And then you decided to come back?

SIMMONS: I came back for three weeks. And that was four years ago [laughs]. I was actually in a relationship at the time. Great big families and stuff like that.

AX: How did you get involved in SHARKNADO?

SIMMONS: They just called. They were after an Australian, which I tend to play sometimes [although the character Baz wound up being Tasmanian]. So they just offered it to me. I read the script and I said, “You know what? If you can come up with a better name than SNAKES ON A PLANE, it’s either going to be the best movie ever or the worst movie ever.” So I thought, “Let’s give it a go.” And it turned out to be so much fun. 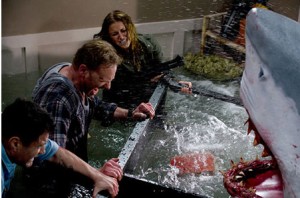 AX: Did you have any flashbacks to your BAYWATCH days with all of the stuff in the water?

SIMMONS: There were a couple of beach days, and I couldn’t go to the beach for nearly ten years after I finished the show, and I’d forgotten how cold the water was [laughs]. People think BAYWATCH was shot in the summer. The skyline was, but the water work was done in the winter so the camera could face down, so it was just so cold. We had to look like we were not cold and the victims that were unconscious were not shivering. It was great, because I’m doing a project with the BAYWATCH people later in the year and I just wanted to get back in that whole mindset. I spoke with the [SHARKNADO] director [Anthony C. Ferrante] and said, “You know, this is how I see him going,” and I just wanted to get my feet wet again, basically, before I went full-on with this other project. So it was a great time, and I tell you what – it was freezing.

AX: You were in some scenes that were filmed in a set that had been built inside a swimming pool …

SIMMONS: Oh, no, the big [practical] shark that came into the house is the one that I dealt with. And then all the other ones – I’d never done CGI before, so it was kind of like fighting off – you know, if you’re having a psychotic episode and you’re walking around hitting things, just going crazy [laughs]? It was like that, because I didn’t know what these creatures looked like. I knew they were sharks, but they were bigger than sharks. It was a great use of my imagination, but until I saw it, I didn’t really understand how they were going to pull it off. We had eighteen days of shooting. It was ridiculous.

AX: How did you find working with all of the green screen for the CGI? Was that fun, was that scary, was that confusing …?

SIMMONS: It wasn’t confusing. Ever since I was very young, my imagination can pretty much pull out anything. Actually, the one challenging thing was to get everybody looking at the same place at the same time, watching the same thing happen, because so much was going on and it was such a fast shoot. So I reveled in not knowing, but I was nervous, because I’d not been a part of a movie like this before. So it was just a learning curve for me.

AX: How was Anthony C. Ferrante as a director?

SIMMONS: He was great. It was one of those shoots where you had eighteen days and if we lost the light, we lost the light. It was like guerilla filmmaking. But the cool thing about it is, everybody knew that we were all in this together; nobody got done before anybody else, so it sort of gave us this compassion for each other, knowing that we were all going to go through this – yeah, it’s cold, but let’s just get it done. I mean, getting a movie done in eighteen days, I’ve not heard of, really. I mean, I’ve been in a movie where my part of it was eighteen days, but not eighteen days for the full production. That was the challenging bit of the whole thing, I would say.

AX: When did you become aware that SHARKNADO was blowing up in terms of public awareness?

SIMMONS: About the same time as everybody else. One day I looked on Facebook, somebody had put up a Facebook page [for SHARKNADO], and we had two thousand people. The next day, we had twelve-and-a-half-thousand people. Ten thousand people in one day is a sign that something is going on, and I think that people just wanted something to chill out about. There’s so much crap happening around the world, but this is great – there’s no swearing in this, there’s a bit of violence, but there’s no sex in it. It’s kind of an escape, I suppose, and the name has just taken on a life of its own. Originally, when it was called DARK SKIES, I was like, “This is cool.” The next day, it was changed to SHARKNADO, and I was a little bit dubious [laughs], because we’d all signed on [to something called DARK SKIES], but once I started working on the movie and realized it was about sharks and a tornado, there’s no subtext, you know what I mean? And it was so much fun. Once I started owning that, once I knew the genre of what I was doing, I was fine. In the beginning, I just didn’t know the genre and [wondered] could we pull it off in time.

AX: Do you have other projects going on that we should be aware of? You said you’re doing something with the BAYWATCH people.

SIMMONS: I had a project with the BAYWATCH people at Cannes, THE B TEAM, at the same time as SHARKNADO. Everybody signed on, but we’re a bit behind in our funding, so we’re just waiting for that and hoping to shoot it towards the end of the year or the beginning of next year. Besides that, I’m writing a book and a screenplay, so I’m just trying to stay creative at the moment.

AX: And what would you most like people to know about SHARKNADO?

SIMMONS: That we all had such a great time making it. And I really hope people get it. Once they see the blooper reel, you’ll see how much fun we were having. Once I saw that blooper reel, I knew it was gold. We were just having too much fun.

Related: Breaking News: SHARKNADO 2 is coming and is official greenlit