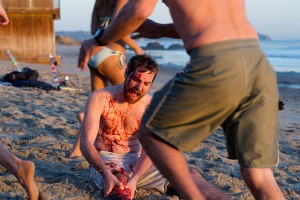 As SHARKNADO continues it forthcoming assault to the small screen courtesy of Syfy making its debut July 11 (check local listings), the interest, for better or worse, continues to expand towards pop culture world domination.

The latest tease comes from Hulu which just unleashed a sequence from the film of the Santa Monica Pier being destroyed by the oncoming Sharknado.

The film stars Ian Ziering of 90210 fame as he tries to save his family from a tornado of sharks destroying Los Angeles. Tara Reid is his ex-wife, Aubrey Peeples his daughter. Joining along for the ride is best friend played by Jaason Simmons, and John Heard as a comic relief barfly (who wields a mean-ass stool).

Oh, and the rest of the co-stars are an army of unstoppable sharks that seem to have an insane taste for residents of the City of Angels. SHARKNADO is directed by Anthony C. Ferrante (BOO) and scripted by Thunder Levin and an Asylum Production.

Check out the scene below.