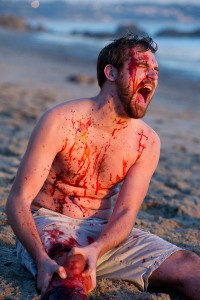 [Full disclosure, SHARKNADO is directed by Assignment X  founder Anthony C. Ferrante, but he allowed us to review the film anyway]

Important fact: sharks are in fact relatively delicate creatures that would not survive oxygen deprivation, chlorine, the Los Angeles sewage system or other environmental disruptions depicted here; to the extent they did survive, they would be fighting to breathe, not trying to consume everything in sight. The former is important to keep in mind while reading this review; the latter is important to remember while watching SHARKNADO, or at least when finished watching SHARKNADO and crossing the bridge to the wide chasm between the film and reality.

The killer shark movie genre is by now a pretty big ocean, with JAWS at the high-water mark and SHARKTOPUS at the so-bad-it’s-unforgettable depths. SHARKNADO swims somewhere in between – it has a preposterous premise and really absurd things happen in it, but it’s ambitious and well-made for a low-budget film, most of the cast is good, the gore is plentiful and done properly, and it moves with commendable speed.

SHARKNADO starts with the notion that a huge storm front full of wind funnels is picking up water, and sharks, and dropping both all over Los Angeles County. Santa Monica Pier bar owner Fin (Ian Ziering) suffers the loss of his business early on. With best friend Baz (Jaason Simmons), cynical waitress Nova (Cassie Scerbo) and bar patron George (John Heard) in tow, Fin heads to rescue his ex-wife April (Tara Reid) and teen daughter Claudia (Aubrey Peeples) from their home in Beverly Hills. Yes, the flooding and wind funnels and sharks reachBeverly Hills. Then the survivors head to Van Nuys to rescue Fin and April’s son Matt (Chuck Hittinger) from his flight school there, because the skies are dropping sharks into the Valley, too. Because Matt is as civic-minded as his father, he comes up with a way of stopping tornadoes that has clearly not occurred to any professional meteorologists so far.

Everyone keeps a straight face through the gonzo proceedings, which defy the laws of physics, nature and plausibility with breathtaking brazenness. This is the sort of thing everyone watches Syfy shark movies for, of course, but what sets SHARKNADO apart is less its outrageousness than its momentum. There are the odd scenes where someone quotes JAWS or grouses about familial disappointment, but there is much more action and many more sharks than we usually get, with downtime kept to a minimum.

L.A. locals will have fun watching local landmarks get trashed and seeing the HOLLYWOOD sign turn deadly; people very familiar with the area will add suddenly getting in front of what’s left of the sign on a journey between Beverly Hills and Van Nuys as a plot point harder to believe than the flying sharks.

SHARKNADO is a movie about a tornado full of man-eating sharks (strangely, the tornado doesn’t seem to dump anything except sharks and the Hollywood sign on the landscape – there are no random fish, swept-up cars, misplaced humans, etc.). It does what it sets out to do with energy, panache – and, not to belabor the point, plenty of sharks and tornadoes. If this is your sort of movie, be sure to watch the end credits roll, which features the song “The Ballad of SHARKNADO.” It’s the perfect capper to all that precedes it.