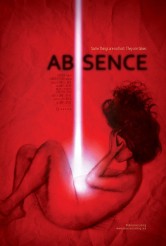 Any low-budget movie that gets theatrical distribution deserves applause for the twin accomplishments of being completed and being seen. ABSENCE is also likely to strike some fond chords forSouthern Californians, who will recognize the freeways and environments, if perhaps not specific locations. However, in what seems to be an effort to avoid horror movie conventions, director Jimmy Loweree and his co-scenarist Jake Moreno fail to replace the conventions with anything more interesting. At the same time, they make a profound miscalculation in the character study side of their equation.

ABSENCE begins with an intriguing super-title about the statistics regarding children being kidnapped from their mothers’ wombs. However, this is a bit misleading, as nobody in the movie ever appears to consider this possibility. Liz (Erin Way), seven months into expecting what will be her first child, wakes up one morning no longer pregnant. She and her husband Rick (Eric Matheny) are bewildered and devastated. The police are suspicious. Liz’s younger brother Evan (Ryan Smale), a film student, believes Liz’s account – which is that she can’t remember anything between the night before and waking up no longer carrying a fetus – but he also feels obligated to document everything with his camera.

Let’s stop here for just a moment. In “found footage” movies, we often wonder why the whichever character is clinging to the camera for dear life, but ABSENCE kicks this up a notch by having Evan quiz Liz about how she’s feeling – did she know the baby’s gender, what will she and Rick do with the stuffed animals they bought, etc. This is presumably meant to show that Evan is socially awkward and to get a little more depth. However, the effect is that Evan seems either seriously disturbed, a sociopath or both. The questions he ask constitute verbal torture, and by the time he comes round to some semblance of behaving like a human being we’d consider remaining with in the same room, it’s too late. It might be another matter if the character was intended to be seriously disturbed or a sociopath, but he’s not.

Then there’s the exposition. Preserving a sense of mystery is usually a good thing in horror movies, but ABSENCE never tells us if there are any physical signs on Liz’s body that the fetus was removed surgically, whether labor seems to have been induced, or whether the police and medical personnel involved think she’s delivered the baby.

Finally, there doesn’t seem to be any sort of cause and effect as to what is happening with the horror aspect of the story. There are some pleasingly subtle touches, but there are also a lot of scenes with characters talking about matters that neither advance the plot nor make deep impressions on us. Some of the dialogue is funny and clever, but a lot of it involves Evan getting on Rick’s nerves and Rick snapping back at Evan. These aren’t interactions we’d like to participate in, and sometimes Evan is so over the line that we wonder that Rick doesn’t make him go home, or at least lock up the recording equipment.

The actors all give good, naturalistic performances, with Way as the saddened Liz a sympathetic standout.

ABSENCE has its moments, but in its determination not to be sensationalistic, it winds up often being far too low-key for its own good.