Detention of the Dead movie review 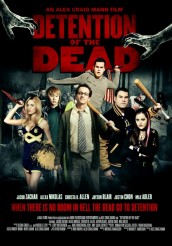 Movie Review: DETENTION OF THE DEAD

A genre blend that makes its points, though it’s never especially funny nor scary

There are a lot of movies about zombies, and a lot of movies adapted from plays, but there aren’t a lot of movies adapted from plays about zombies. DETENTION OF THE DEAD wins points for being different on that score alone. It’s actually nicely acted and written, and manages to marry THE BREAKFAST CLUB and DAWN OF THE DEAD – its two most obvious inspirations – in workable fashion. The film has trouble surmounting one obvious, inherent problem, which is that when a play makes fun of movie conventions, it can be hilarious, but when that same parody is transferred back from stage to screen, it’s now in essence back where it started. Theatre gags that work because we don’t expect to see them on a stage look on screen like, well, standard film bits. Without having seen the play, it’s impossible to be sure, but it’s easy to imagine that something has been lost in the translation here.

Director Alex Craig Mann and playwright Rob Rinow, who collaborated on the screenplay together, clearly love the horror genre, what with characters named Willow(Alexa Nikolas), Brad (Jayson Blair), Janet (Christa B. Allen) and Ash (Justin Chon). They also love teen angst films, but have the sense to keep their references more or less timeless. Sure, there are explicit nods to George A. Romero and BUFFY THE VAMPIRE SLAYER, but those will be with us so long as filmed horror has a foothold in the culture.

Eddie (Jacob Zachar), a brainy high school geek, has been sentenced to detention with the schoolmates listed above, plus bully Jimmy (Max Adler).Willowis a goth chick with a secret fondness for Eddie, Eddie pines for beautiful cheerleader Janet and Janet is with ROTC-bound jock Brad. Ash is a cheerful stoner and drug peddler. All of them are under the watchful eye of English teacher Mrs. Rumblethorp (Michele Messmer), but it’s not long before they realize the halls, classrooms and campus are swarming with the living dead.

In typical zombie movie fashion, our core group hole up, then try to figure out how to escape. Likewise, in traditional teen angst fashion, concepts of popularity, pressure, sincerity and so on are discussed as though the topics are new to the characters, though not to the audience.

There is some tonal treading of water here, as DETENTION OF THE DEAD is never unfunny. The soundtrack has some unexpectedly sharp, entertaining numbers. Director Mann and the cast don’t hit the jokes too hard, so everything rolls along without poking us in the ribs. However, there are no attempts at all to go for even minor scares, albeit there are some gross-outs. (There is a repeated problem with fake severed limbs looking a bit too fake.) From a logic standpoint – yes, this is satire, but the script keeps bringing up what Romero fans two of the characters are – it seems odd that folks who are well-versed in the zombie genre don’t immediately try to figure out how best to neutralize the brains of the undead.

DETENTION OF THE DEAD isn’t the best zombie movie ever (or even this year) or the best teen movie ever, but we’ve all seen worse examples of both genres, and as combinations go, it serves as diversion for the audience.