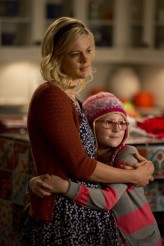 Some interesting politcal commentary in the 1st Ryan Murphy-less episode

It’s interesting to me that the first episode of THE NEW NORMAL, “Obama Mama”, that Ryan Murphy didn’t write and direct is the first episode to really move away from the God awful stereotypes that have been plaguing this show since the pilot. I like the show, but it’s been a big bone of contention for me that every single episode is chock full of cliché stereotypes all across the board, from the gay couple to the right wing grandmother and the sassy black assistant.

“Obama Mama” is also our first look at what Brian (Andrew Rannells) does for a living. Shock. He’s based on Ryan Murphy and writes and produces a TV show called SING. Of course, this is a bit of a stretch, simply because the producers I know on TV shows work their collective asses off and really don’t have time to lounge around and be as much of a homebody as they’ve made Brian so far. Oh well, it’s a sitcom.

The politics of this episode, whether it’s the boys’ lack of black friends or Nana’s (Ellen Barkin) rant about the Republican Party and all that they are trying to accomplish, are all handled with a really nice degree of impartialness on both sides. Not backing Romney for President with these comments, but the way the Republican argument is present in this show actually makes me see a bit of the other side of the coin. (not much kids, just a bit)

The social commentary is a bit heavy handed, but what else is new on this series or any other Murphy helmed show? Back in the days of NIP/TUCK, things might have been more subtle in terms of messages preached at the audience, but since GLEE, everything coming out of Ryan Murphy’s camp is about as subtle as a forty pound sledge to the head.

There are some cute moments with the boys and Goldie (Georgia King) and Shania (Bebe Wood), but now we have the shocking development of Goldie’s ex suing for custody of Shania and the two of them are going to have to move back home to sort it out. How does that work when she is legally bound to the guys and the fact that she is carrying their baby? What would a sitcom be without a little drama? Tune in next week to hear Nana say something bigoted and Brian make some very witty and funny comments, and you just might see Shania steal the episode.

Leave a Reply to pooter