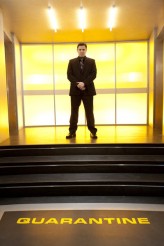 Astraeus' returns and it's four years later - or is it? 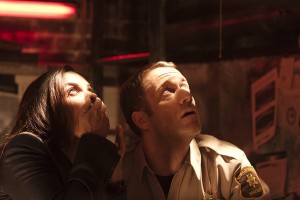 There are so many things to love about EUREKA that it’s kind of bittersweet that “Lost” is actually the Season 5 premiere of the final season. Here is a show that celebrates genius and being smart, but also respects each character’s gifts. It is one of the most diverse shows on television, with two African Americans in prominent roles as scientists, including one woman. And women here are just as smart as the men and just as inclined to mess up. Plus it’s funny and dramatic with just a hint of romance.

So we’re back after the cliffhanger from Season Four – “One Giant Leap.” Allison (Salli Richardson-Whitfield) was locked on board the Astraeus when it took off for parts unknown because the location coordinates had been changed. And as we come back, Allison awakes realizing that the ship is in full, uncontrolled descent. She wakes up the crew and they make reentry only to find that they’re back on earth, in Eureka, as a matter of fact.

But, surprise, surprise, it’s not the Eureka they left. Four years have passed. There are multiple Deputy Andys (Kavan Smith) running around in black flak wear, except for the presumable prototype – who’s still perfectly cheerful, but now has a really nasty edge. Oh, and S.A.R.A.H. is running Global Dynamics. Turns out Senator Wen (the nemesis from Season Four, played by Ming Na, who does not appear in this episode) put the artificial intelligences in charge after the Astraeus went missing.

So all is merry and bright now in Eureka, and no accidents have happened in well over a thousand days, which naturally means something is seriously out of whack. Spy robot drones are hovering everywhere and everyone who acts out gets a brain scan – supposedly diagnostic. Not a chance. It’s straight up mind control. You know it is when Dr. Isaac Parish (Wil Wheaton) is suddenly being nice to Fargo (Neil Grayston).

Henry (Joe Morton) is one of the few resistors, and has had his clearance to GD revoked, but has the basement in his workshop rigged so the spy bots can’t see what he’s up to. Jo Lupo (Erica Cerra) is back in uniform and just barely compliant, as is Jack Carter (Colin Ferguson).

And speaking of Jack and Jo. It turns out that the two have fallen in love with each other, since both Allison and Zane (Niall Matter) were presumed dead – which is more than a little hard to take for Zane, who went back and forth with Jo’s weirdness last season, and even harder for Allison because her infant is now a little girl who doesn’t recognize her and Jack is, well, with Jo.

Needless to say, our crew pulls together and short-circuits the robots that have all of Eureka in thrall – but it all seems just a touch too easily accomplished. Oh, yes, there are hurdles, but really – would you put something as important as a firewall behind a panel that can be tunneled into with few security precautions?

There’s an answer – and it’s about where Astraeus really went. Well, we’re not sure exactly where it is physically, but it and the crew are now in the hands of the evil Beverly Barlow (Diane Farentino).

You know how frustrating it is when you see writers back themselves into corners that you have to figure they’re not going to write themselves out of too easily (the classic case in point: President Bartlett’s multiple sclerosis, from THE WEST THING).

The thing with Eureka is that they back themselves into corners regularly. I’m watching the revelation that Jack and Jo have gotten together and wondering how they’re going to work this one out, and it really looks like they’re going to in a really interesting way when Allison and Jack agree that they will find a way to make their new relationships function – you know, like adults do when there’s a problem, and then we find out it’s all a virtual reality, anyway. Which is actually pretty cool.

With EUREKA, it doesn’t matter what the corner is, when you’ve got characters who routinely bend time and space, that corner can very organically become a new portal into a whole other plotline.

Kudos to the writers for what looks like an exhilarating new season. Too bad it’s the final one.