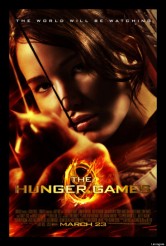 Very good, but not a knockout

Not having read Suzanne Collins’ best-selling novel THE HUNGER GAMES, this reviewer can only report secondhand on the film version’s fidelity to the source material (according to those who have read the book, it’s fairly close). As to how well the HUNGER GAMES movie stands up on its own, it is a good entertainment that somehow misses being great.

At some point in the future, the nation known as Panem (presumably previously theU.S.) has a civil war, with twelve districts rebelling against the central government. The central government won and devised a unique system that is allegedly designed to reaffirm and honor the peace treaty. Each year, two “tributes” between the ages of eleven and eighteen, one male and one female, are selected by lottery from each of the twelve districts. These tributes are brought together to participate in the Hunger Games, a grueling physical battle to the literal death, with the lone survivor given fame and riches.

The brush that all of the tributes have with fame is an ultra-glitzy down the rabbit hole adventure. The Games proper begin an hour into the film, and proceed most of the rest of the movie, which runs 142 minutes total.

The Games are suitably tense and swift. The depiction of bloodshed is often offscreen, and what’s shown is in line with what we see on broadcast television. We worry for Katniss and wonder how she’ll prevail; we worry even more for Peeta, as he clearly doesn’t have Katniss’ survival skills.

We like Katniss very much, courtesy of both the writing andLawrence’s strong performance. Peeta is an enjoyable character, whose finest moments come when he’s schmoozing with Games emcee Caesar Flickerman (Stanley Tucci). However, given the stark premise, the characters’ situations aren’t as morally harrowing as we imagine they might be at the outset. There’s nothing wrong with the adventure we get, but we’re led to expect an extreme that is never hit.

The glamour sections work remarkably well, thanks partly to some really impressive production design by Philip Messina and partly because this is where THE HUNGER GAMES as a film seems most in its comfort zone. At this point, the business of talking to contestants in pseudo-intimate friendly fashion is less like parody and more like replication of real-world reality competition TV. The filmmakers and actors know exactly what they’re depicting here, which gives these sequences a seemingly effortless edge of cruelty and willful blindness on the part of the populace.

However, this leads to a question about the basic premise. Yes, reality television competitions are sometimes so mean-spirited and potentially dangerous that it seems that we might actually be on the slippery slope to Hunger Games of our own. But the government has traditionally shied away from having television show the lethal violence of war – it’s widely believed that the images coming out of Vietnam bolstered the anti-war movement in the United States and there was a dust-up between networks and government not so long ago in showing the flag-draped U.S. military coffins coming out of Iraq. Showing the nation a preteen child – and Amandla Stenberg (actual age thirteen) as Rue looks very young indeed – in mortal peril seems like it would incite rather than quell rebellion. Since the whole point of the Games within the story seems to be to keep the rich stupefied and the poor districts that previously revolted properly chastised, this appears to be counterintuitive. Granted, President Snow (a quietly malevolent Donald Sutherland) seems to have various secret scenarios going on within his mind, but while this may well be addressed in the sequel, here we wait in vain to learn whether this is all part of some larger scheme to control the masses, or whether this element of the Games is playing out against expectations.

Apart from this meta aspect, THE HUNGER GAMES works as a hero’s journey story.Lawrence is a wonderfully empathetic protagonist and much of the supporting cast adds unexpected power. Tucci as Caesar is anguished, then transforms himself with a brilliant grin as the spotlights hit him. Harrelson has fun with the multiple aspects of Haymitch and Kravitz is both commendably intense and warmly soothing as Cinna.

THE HUNGER GAMES is good, moves adroitly and holds our attention. It just doesn’t fire the imagination the way its source material seems to have done for many readers.

Exclusive Photos: From the Cast signing of TRUE BLOOD: ALL TOGETHER NO...
Movie Review: KUNG FU PANDA 2
Interview: Malcolm McDowell on the 40th Anniversary of A CLOCKWORK ORA...
Exclusive Interview: DEXTER showrunner Scott Buck on Season 7 and beyo...