What does the new hit movie have in common with THE RUNNING MAN, ROLLERBALL, BATTLE ROYALE and THE WHITE MOUNTAINS? Everything!

They say that there are only seven stories, aka plots, and that every story we’ve ever read, heard, or seen in a film, is either one of those seven, or a combination of one or more of them. Proof of this was recently hammered home in a big way via the AVATAR/POCAHONTAS/FERNGULLY debacle.

While I’m a big fan of mash-ups, aka taking elements of several existing stories, lyrics, or melodies, and making them into one new-ish one, I do find it odd that with all the hoopla surrounding this season’s darling, THE HUNGER GAMES – no one seems to remember that its story is far from a new one. 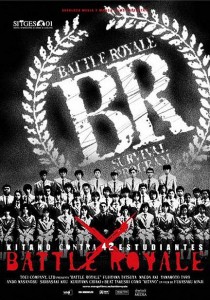 #1: BATTLE ROYALE: Let’s start with the obvious and controversial, BATTLE ROYALE. BR is a fairly well-known and infamous Japanese film, released around 2000, in which The Act of Battle Royale decrees that once a year, a class of ninth graders is randomly chosen, dumped on a tiny deserted island, armed with random hardcore weapons of every imaginable stripe, and are then instructed to murder each other. The kiddos are also outfitted with locking electronic collars that monitor their locations and vital signs, and all of these STAR TREK-ian devices will explode if more than one student is still alive at the end of the 72 hour “game.” These normally harmless kids are hence transformed into brutal killers. The acting is top notch, the violence is mind-numbingly merciless, and the film is beautifully lensed.

Here’s some actual dialogue from the movie, spoken by the TV commentator: “This year Zentsuji Middle School number 4’s Class E was chosen from among 43,000 Ninth grade classes. This year’s game, said to be more blistering than the last – – Oh look there! There she is! The winner’s a girl! Surviving a fierce battle that raged two days, seven hours, and 43 minutes – the winner is a girl! Look, she’s smiling! Smiling! The girl definitely just smiled!” 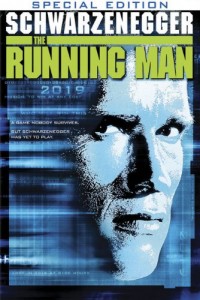 #2: THE RUNNING MAN: Next on my state-the-obvious HUNGER GAMES rip-off list is 1987’s well-known and beloved, THE RUNNING MAN. You’ll no doubt recall that in RM’s futuristic totalitarian world, a wrongly-convicted cop (Arnold Schwarzenegger) tries to survive a public execution gauntlet staged as a TV game show hosted by none other than FAMILY FEUD/HOGAN’S HEROES star Richard Dawson. In this society, felons are given the televised chance to “run to freedom” but have to elude the “stalkers,” AMERICAN GLADIATOR-esque rejects who hunt down said criminals and kill them in gratuitously horrifying ways, reminiscent of Roger Corman’s classic  (the 1975 original) DEATH RACE 2000. RUNNING MAN is also notable for (1) its director, STARSKY & HUTCH‘s’s Paul Michael Glaser, (2) its source material, a short story by Stephen King (under the pseudonym Richard Bachman), and (3) also featuring rare acting turns by rockers Mick Fleetwood and Dweezil Zappa.

Ringing any bells yet, Gamers? 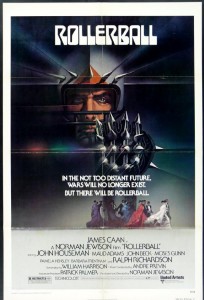 #3: ROLLERBALL (the original):  This iconic James Caan starrer was actually a huge success in 1975, that also nearly made Bach’s classic Toccata and Fugue into a quasi-pop hit. In RB’s future, corporations have replaced governments (self-fulfilling prophecy?), and an ultra-violent televised sport known as Rollerball represents these various regions/companies. This game is supposed to help control the populace by demonstrating the futility of individuality, but one player, Jonathan E., becomes its star and hence the poster child for not only his own personal freedom, but that of the everyman. Jonathan’s rise to fame threatens the corporations’ control, so in an effort to remove him from the sport, they start to increasingly scale-back the game’s rules (no more penalties, no more time limits, etc.), until the “winner” is merely the last player left alive on the track. 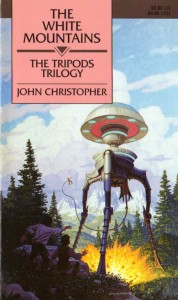 #4: THE WHITE MOUNTAINS (aka THE TRIPODS): This first book in a legendary Sci-Fi trilogy that began in 1967 by John Christopher, has only come before the lens once, in a low-budget 1984 BBC mini-series called THE TRIPODS Every few years I spot another notice in the trades that a big budget Hollywood version is about to be made, but somehow it never happens.

TWM/TT is set in a pastoral, post-apocalyptic world, mostly filled with small villages, and what minor industry that still exists is conducted under the omnipresence of the tripods, hence the series’ title. The look here is reminiscent of the Middle Ages, but rarified mechanical artifacts from more modern eras are still sometimes allowed to be used, giving people and their homes a vaguely Steampunk-ish vibe.

In this world, giant, three-legged, extraterrestrial walking machines (the tripods) tread the Earth which has been long-since taken over by unseen aliens who ride around in these H.G. Wells-ian contraptions. The inhuman conquerors control human minds by installing cerebral implants called “caps” when kids reach the age of 14. These caps suppress curiosity and creativity and leave the recipients placid and docile slaves, incapable of dissent. These delicate, circuit- board-y mechanisms even cause the humans to worship the tripods like gods, but  some people’s minds can’t function properly after the installation of the gizmo and they are driven insane instead of successfully being controlled.

But this all means that until age 14, everyone still has free will.

So once each year, the tripods make their way to every village, and each kid over 14 can choose to participate in a quasi-Olympics, whose winners earn the privilege of being taken to the aliens’ base city to serve them, which is considered a high honor.

Of course, the horrific truth is that these “games” really only serve to identify the strongest and most durable of the kids, because unbeknownst to the mind-controlled adult humans, said aliens are from a planet with much harsher gravity and an unbearably humid and hot atmosphere which they have re-created in their base city here on Earth. Hence, only the most physically stalwart humans can withstand that environment… before succumbing to it and dying while serving their alien masters, which unpleasant slavish end is always assured.

So take the above, jumble them up, add a dash of Orwell and a splash of Bradbury, bake at 350 for 110 minutes and voila!