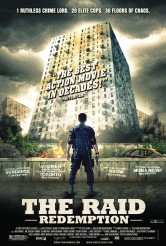 Breathless and breathtaking action, action and did we mention action?

There is no such thing as nonstop action in a feature film. Sooner or later, a character will get into an elevator, peer apprehensively around a corner or ask a question. This reviewer is duly bound to report that all of these things happen at one point or another in THE RAID: REDEMPTION. These moments stand out in this context, because they are among the very few when the characters aren’t engaging in gun battles, or else hand to hand, knee to eye, foot to forehead, etc. physical combat with such speed, dexterity and ferocity that the cumulative effect is that of a knockout punch.

The set-up of RAID is simple. An elite police SWAT squad in Jakarta, Indonesia is sent into a squalid high-rise residential building to take down the criminal (Ray Sahetapy) who owns the place. Unfortunately for the cops, the place is fully inhabited by the crime lord’s minions, who don’t welcome the intrusion. When circumstances make retreat impossible, the only course left for our heroes is to fight their way to the top floor.

There’s more going on here, of course, but there’s no reason to spoil the plot, much of which can be guessed from genre traditions. While it’s almost never the case that an action movie can’t use a little more nuance – filmmakers, don’t try this at home, on set or in the editing suite – THE RAID: REDEMPTION is that rare film that really doesn’t require more narrative complexity than it has, because its physicality is just that good. The martial arts talents – the style favored here is called silat – of Iko Uwais, who stars as the upright policeman Rama, Joe Taslim as the police unit commander Jaka, Doni Alamsyah as one of the building regulars and Yayan Ruhian as a killer aptly dubbed Mad Dog are tremendous. Sahetapy is supremely cynical as the confident drug lord.

Director/writer Gareth Huw Evans creates a sense of claustrophobia, tension and impending doom. His full-scale melees feel chaotic and dangerous, while the more contained fight scenes are awe-inspiring in their length, variety and ferocity.

Choreographed action is always supposed to reveal character, but this works to a much fuller extent than usual in THE RAID: REDEMPTION. In most movies, when the bad guy foregoes use of a gun to prove how proficient he is, we know his arrogance will prove his downfall. Here, when Mad Dog challenges adversaries, it seems to come from a place of genuine need – this man is only alive when he’s fighting. Likewise, we know that Rama and Jaka are good men from their willingness to endure these battles for the sake of their belief that they must combat the evil represented by the gang in the building. (REDEMPTION is part of the title for a reason.)

THE RAID: REDEMPTION won’t be for everyone, but for fans of martial arts action tales, it’s an almost perfect example of its genre.