Home » Exclusive Interview: Molly Parker has THE FIRM in her grasp

Exclusive Interview: Molly Parker has THE FIRM in her grasp

The actress talks about the NBC legal thriller series 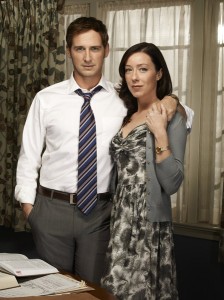 In John Grisham’s novel THE FIRM, as well as in the 1993 movie version, Mitch McDeere is a cocky young lawyer who gets on the wrong side of the sinister law firm that employs him. In NBC’s series THE FIRM, Saturdays at 9 PM, ten years have passed since those events, with Mitch (Josh Lucas), his wife Abby, played by Molly Parker, and their young daughter in Witness Protection during that time. When Mitch decides to resume his real life, he accepts a job with another big law firm, which may be even more malevolent than the one he fled.

Parker, a native of British Columbia, Canada, has been a regular on a number of series, perhaps most memorably as the mercurial widow Alma Garret on DEADWOOD, as well as SHATTERED, SWINGTOWN and TWITCH CITY. She has also appeared in LONESOME DOVE and a slew of feature films, including the memorably strange KISSED, MEN WITH BROOMS, THE ROAD and the remake of THE WICKER MAN. She also had an arc on the most recent season of DEXTER as a woman unaware of her brother’s unfortunate psychological condition.

At a party thrown by NBC for the press, Parker talks about playing the wife of a good man with questionable judgment in THE FIRM, as well as some other projects.

ASSIGNMENT X: How would you describe Abby McDeere?

MOLLY PARKER: She’s a sort of strong, just, grounded woman who would be completely justified, I think, in being paranoid and terrified, and yet is somehow a survivor.

AX: Does Abby ever want to bang Mitch over the head and tell him, “You know, the last time you joined a law firm with seemingly sleazy people, they turned out to be really sleazy people, and guess what! you’ve done now?”

PARKER: “And ruined our lives.” Yeah. Absolutely, I think that she challenges him. There’s sort of a fine line for the purposes of what we’re doing between challenging him and nagging, and we don’t want her to come off like that, either, so I think she’s a thoughtful woman who really understands him and also wants very much to be of the world again.

AX: Did you and Josh Lucas talk at all about your characters’ relationship with each other before working on the scenes, or did you just jump in and do the scene and see how it went?

PARKER: We sort of did both. We talked about it as it went along, and we had a small rehearsal process before we started. We had both read the book, we talked about the book. We talked about aspects that we wanted to see that we thought were interesting. But then you need to respond to what’s written and what [show runner/executive producer] Lukas Reiter writes for us to do and go from there.

AX: THE FIRM jumps back and forth between ten years ago, the present and a few weeks into the future, with different visual looks for each, presumably to make it easier for the audience to understand when the different scenes are happening.

PARKER: Yes. I didn’t direct it, but my understanding is that they did that in order to visually differentiate between the flash-forward stuff, and then there’s a bit of flashback [ten years ago with] Mitch and Abby, when she says to him, “I’m pregnant and we can’t run, we have to go into Witness Protection,” that’s kind of a darker, more eerie-looking thing. So visually, that’s what they’re trying to do.

AX: You’ve done a lot of period pieces. Were you happy to do something contemporary with THE FIRM, do you like going back and forth between past, present and future?

PARKER: Yeah. I do like period quite a lot. I find it gets hard to understand the time that you’re living in. Even when you get ten years beyond – “Oh, that’s what the Nineties were, I get it now” – while you’re in it, I always find it difficult to understand. So I enjoy doing period stuff. But THE FIRM is in many ways its own world anyway.

AX: You do a lot of running in THE FIRM, often while wearing high heels. Has that been physically challenging?

PARKER: [laughs] Well, it’s never fun to run in heels. That’s just a bad time. I try always to get some running shoes on if I can, but you don’t always know when you’re going to have to run. Running in heels is terrible for anybody.

AX: Was there anything you researched or had to learn in order to play Abby?

PARKER: The paralegal legalese that I don’t know. So as [the speeches with legalese] come up, I talk to Lukas, or I talk to friends of mine who are part of this [legal world], and I try to figure it out. But it’s not a research-heavy part.

AX: You also had an arc on DEXTER this past season, playing Colin Hanks’ sister.

PARKER: I did a couple episodes of DEXTER right before we started THE FIRM. It was fun. You know, they asked me to do it, and almost as soon as they asked, I got cast on THE FIRM.

AX: Would your role on DEXTER have been larger had you not been cast on THE FIRM?

PARKER: I don’t know if that’s true, but I needed to go [to THE FIRM] pretty quick. I think [the role on DEXTER] was never going to be a big, big part.

AX: Do you have any other upcoming projects that we should know about?

PARKER: I’m in an HBO movie called HEMINGWAY AND GELLHORN [as Hemingway’s wife Pauline] that is a Clive Owen project. I did a little interesting independent film called THE PLAYROOM, but it doesn’t have a release date yet.

AX: Anything else you’d like to say about Abby?

PARKER: She gets quite active – she has some heroic moments, I’ll put it that way.