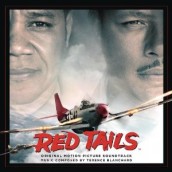 Terence Blanchard has been fighting the good fight when it comes to scoring the black experience in any number of scores for Spike Lee, including his look at negro soldiers in the WW2 Italian conflict for the MIRACLE AT ST. ANNA. But if this composer hasn’t progressed in Hollywood as far as he should have long ago, it’s because Blanchard’s complex, jazz-inflected orchestral writing for Lee’s films, not to mention his pigeonholing as a composer best suited to urban-themed pictures (thankfully excepting his awesomely nutty Kung Fu score to BUNRAKU) hasn’t made him as easily clichéd as a whitebread ‘action guy.’ But now as Blanchard returns to Italy’s field of battle once more, he’s obviously determined to fly high with the RED TAILS, a score that more than earns its stripes, and racial pride by being both ethnically tuned, and multiplex accessible at the same time.

There’s a big difference between keeping up with the changing musical times, and selling out- something which Patrick Doyle proved by showing he could turn his gloriously grandiose symphonic sound to the contemporary action-percussion tastes of THOR and RISE OF THE PLANET OF THE APES without losing his soul in the bargain. Ditto Terence Blanchard on RED TAILS. While his writing here might not reach the Copland-esque complexity of his past scores, Blanchard has lost none of his striking voice, or jazz chops. The difference here is that the sound of his people’s struggle is having a great time kicking Nazi fighter pilot ass. It’s an excitement conveyed through his most thematic and breathless score yet, kicking in the daredevil jams when screaming rock guitars, electronic rhythms, Gospel organ and Zimmer-esque percussion that roars across the soundtrack- of course with Blanchard’s jazz and vocal inflections attached. His score is at once exhilarating, entertaining, and audacious, all making for one big announcement to Hollywood that he’s got the chops to compete in the multiplex action department. Judging by this thoroughly entertaining movie’s audience reception, Blanchard has hopefully earned the scoring stripes to branch out way beyond the musical skin tone that’s often been put on him.

“America the Beautiful”’s been played ad infinitum in movie scores, not to mention sporting events. But the depth of feeling that goes into Blanchard’s version that wraps up RED TAILS makes it one of the tune’s most profound renditions yet. Flowing from a singular jazz trumpet to take on choral and symphonic power, Blanchard’s majestic take captures the spirits of God, country, and equality that the Tuskegee Airmen fought for, creating a moving, musically patriotic salute if there ever was one.