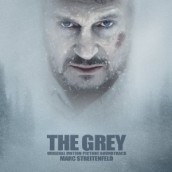 Joe Carnahan’s previous films like NARC, SMOKIN’ ACES and THE A-TEAM have had no shortage of headbanging action for composers to play. But those kinds of opportunities are in short supply for his esoteric man-against-nature film THE GREY, which instead offers shades of macho-talk colors for Marc Streitenfeld to play with when wolves don’t occasionally show up to kill its Alaska-stranded characters.

Yet for a film so intent on making this situation “real” in pseudo-Hemingway docudrama fashion, the THE GREY gets the most color, and emotional impact when Streitenfeld’s is hovering about the Deadly White North. Pretty much avoiding overt “survival” music, Streitenfeld’s score is beautifully haunting and unusually transparent. Cast with ethereal orchestral, a violin and chilling, high-pitched tones to sink in the feeling of inevitability, Streitenfeld makes the music reflective and mesmerizing without being depressing in the bargain.

And when things get nasty to jump-start the film, Streitenfeld amps up the furry monster factor by effectively switching into horror mode, but again without overdoing it on the trembling strings, ominous samples and primitive drums. While THE GREY‘s castaways might do too much thinking, Streitenfeld contemplates their desire for life, and acceptance of their wolf-gnashing destiny with impressive musical nuance.

Related Link: Click on link to buy The GREY soundtrack