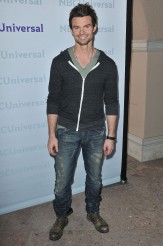 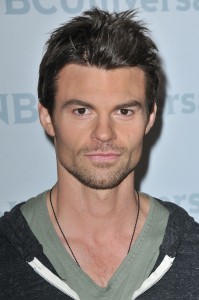 ASSIGNMENT X got a chance to catch up with THE VAMPIRE DIARIES star Daniel Gillies recently at the NBC SUMMER PRESS DAY at the Langham Huntington Hotel & Spa in Pasadena.

Daniel was there to promote his new NBC series  SAVING HOPE (debuting this summer), and although his storyline on THE VAMPIRES DIARIES is not over yet. In SAVING HOPE Daniel stars as Dr. Joel Goran, along with Erica Durance (SMALLVILLE) and Michael Shanks (STARGATE ATLANTIS).

ASSIGNMENT X: Your character, Elijah on THE VAMPIRE DIARIES is considered the ultimate gentleman and while you have brotherly love for Klaus (Joseph Morgan), there was once a time that you sided with Elena’s (Nina Dobrev) family?

DANIEL GILLIES: Yes, and he sort of vacillates between the two worlds. Elijah is sort of the consigliere to Klaus, and as indebted he is to his brother, he knows that his brother could betray him at any given moment. It’s never a safe place to be. What he marvels in Elena is that she is this creature and even though she has only has one lifetime and he has lived through hundreds of them, she seems to be living it more nobly than the rest of the creatures that he knows who have had ample time to perfect what it is to be a decent creature.

AX: Can you say how many more episodes you’re going to be in?

GILLIES: No I can’t. I never know.

AX: Are there any similarities between this character and Elijah, apart from the fact that Elijah is a vampire and dead?

GILLIES: They are vastly different; for one thing I am getting to use my own accent for the first time in 12 years as an actor. I’ve been playing Americans for 12 years now, which is kind of strange for me. It’s unusual and slightly disturbing because when I’m saying all this medical stuff it’s my own voice. Trying to create this character is a little more difficult in a sense, because I kind of have to remove myself from the equation. I am like where do I place the distinction? Normally I always start a character with the voice and this time I had to start in a completely different place with Joel, it was very unusual to be honest.

AX: So this is closer to you than anyone you’ve ever played before?

GILLIES: Yes, in a sense I think he is. Although I did a show in New Zealand years ago where I played a lawyer and he was a lot like me, and the writers really wrote for me on that one. I’m starting to notice trends that the writers will take certain things from my life, but they really have a purpose with him and for him that I didn’t quite see in the pilot. It’s very different from me actually. He evolves. 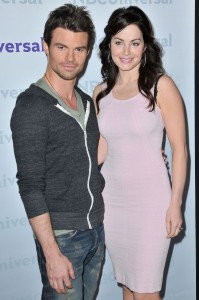 AX: Did you actually have to learn medical terminology?

AX: So what made you become an actor?

GILLIES: Because I am lazy and I don’t want to work that hard.

AX: What did they say when you told them you were going to play a doctor?

GILLIES: My family was delighted when they heard I was playing a doctor! It has to be wonderful for them because I am from a small town in New Zealand and it’s amazing that I get to play these magnificent roles on American television. I am spoiled, and the fact that my mom, in this little town in New Zealand, can sit and watch me on television is a real kick.

AX: What’s it like when you go back to New Zealand now?

GILLIES: It’s still very rural. I love it there and it’s beautiful. It has to be one of the most beautiful places I’ve ever seen on earth…its tranquil and it doesn’t change very much in between visits. And I am talking sometimes that it’s five to seven years between visits, because my family lives all over the world. They live in Germany, Australia, England, and I think that while it’s unusual going back is also like very humbling, because we are spoiled in this business. Everyone listens to us like we are important and we are not, these doctors I’m listening to every day and the ones I’m studying are important. They are awesome and they are heroes. They are amazing people.

AX: When did the show actually come about for you?

GILLIES: April last year, I was still part of THE VAMPIRE DIARIES, but I had a hiatus. I hadn’t signed an exclusive deal with THE VAMPIRE DIARIES and so I looked at pilots and they were really only two or three around that I wanted to go in on and one of them was this one. We shot the pilot in May last year and now we are on episode five. So we finished it in May, found out in November we were going to series so it’s been a long journey. 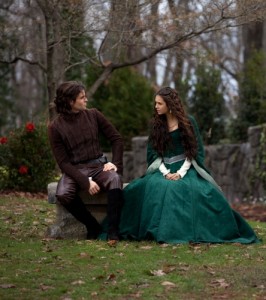 AX: I heard your wife Rachael [Leigh Cook] said that she would not do the long-distance thing anymore since THE VAMPIRE DAIRIES was shooting in Atlanta and she was shooting her show (PERCEPTION) in Toronto and now she is back in Los Angeles shooting.

GILLIES: It’s actually weird; my wife Rachael shot the pilot for her show in Toronto, so we thought for a second that we would be together. But then they switched the location of her series to shoot in Los Angeles, so we are separating again. It sucks and I hate it. But we do have wonderful lives so if this is the price… then who cares? We are spoiled!

AX: You said your family was delighted that you’re playing a doctor, what did they say when you are surrounded by vampires?

GILLIES: Oh man, they were thrilled that people were just identifying that I was on a show. I mean it’s a big show in the world of vampires. You forget that when you travel and it’s almost bigger overseas. I was in Thailand recently and thought the kids there didn’t watch the show. I looked at TV there and there were no American shows, so I thought great! I’m going out and while I don’t drink, I was with a bunch of young girls and guys who ended up getting drunk. I was with Rachel and as they got progressively drunker they started coming out of the closet that they watched the show. They were telling me how much they loved it, so I asked them how they were watching it? They all download it. This is how old I am, I mean I am 36 years old and I didn’t know that people ripped things off the Internet so they could see their shows. But going back to New Zealand, it’s great that my parents get to see the show. Or maybe it’s not; maybe they find it a pain in the ass! (Laughs) 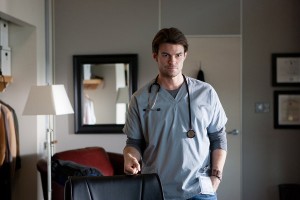 AX: Not that there is an end in sight, but when THE VAMPIRE DIARIES does end would you like to see it done on the big screen rather than television?

GILLIES: That’s difficult to say. I would love to do that. I love those people and I love working for them. Obviously, if you wanted to go cinematic with that show I think it would look great on the big screen, especially with the way they shoot it.

AX: Did you know going into this show that Erica was from SMALLVILLE and Michael from STARGATE?

GILLIES: Yes, I did, but I didn’t realize we were a trilogy of sci-fi actors, but I’m just delighted to be with them. They are both some of the best actors around.