Home » CD Review: THE WAR OF THE BUTTONS soundtrack 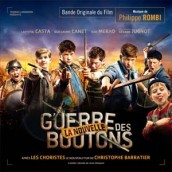 ©2012 Music Box Records
THE WAR OF THE BUTTONS soundtrack
Reviews

CD Review: THE WAR OF THE BUTTONS soundtrack

Cute kids go to fake war again in the fourth adaptation of Louis Pergaud’s 1912 novel THE WAR OF THE BUTTONS (LA NOUVELLE GUERRE DES BOUTONS), which was first made in France in 1962 before having its non-violent action moved to the Irish countryside for a 1994 version. Then in 2011, the story traveled back to its country of origin twice, which might be some kind of record for retelling the same story. For director Christophe (LES CHOIRISTES) Barratier’s version, Gallic composer Philippe Rombi takes up the musical charge from Jose Berghmans, Rachel Portman and Klaus Badelt with a score that’s hoists a flag of victory in anyone’s interpretation.

A French composer that Hollywood needs to hire immediately, Philippe Rombi has impressed in his homeland with such scores as SWIMMING POOL, JOYEUX NOEL and even the LA-set HOLLYWOO. And like his compatriots, Rombi has shown a wonderfully unabashed love for themes and lush orchestrations, an affection that was also very much alive in America during the 1980’s, as particularly practiced by such composers as Bruce Broughton, James Horner and David Shire Williams in the likes of THE BOY WHO COULD FLY, COCOON and RETURN TO OZ. Wonderfully possessed by those scores’ luxurious power, Rombi’s WAR OF THE BUTTONS will provide an instant flashback to the same soundtrack fans that flocked to Michael Giacchino’s astute referencing of John Williams in SUPER 8. But as opposed to an orchestral beast beating out the rhythms of CLOSE ENCOUNTERS and JURASSIC PARK, Rombi’s WWII-set BUTTONS beautifully evokes the sound of symphonic children’s adventures from 80’s era, particularly Broughton’s BOY. It’s all about the theme here, and Rombi’s got one of the loveliest I’ve heard in years, a gentle, gossamer tune that’s all about youthful innocence at play, of course in the kind of sun-drenched little town where no one’s going to get hurt. That being said, Rombi’s bucolic score isn’t devoid from un-cloying sentimentality that evokes the real war games around the characters, with military danger, the tragic sound of fallen comrades and the heroism of bruise-inducing combat. Creatively using flute, chorus and drum rolls with his orchestra, Rombi’s music has a vibrant sense of nostalgia, not to mention unabashed melody that not only gives a sense of poignancy to the days of youth, but when scores of this type could charge into battle fully armed with an unabashed orchestra, without getting slaughtered.

Not only is THE WAR OF THE BUTTONS one of the best releases yet from France’s upcoming Music Box Records label, it also might be the nicest, most peace-inducing soundtrack to have the word “War” in its title, or GUERRE as they pronounce it.

Click on Link: To Purchase the WAR OF THE BUTTONS soundtrack