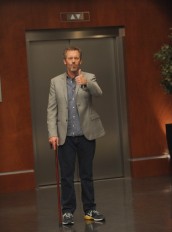 No big surprises, except that House shows he does have some heart 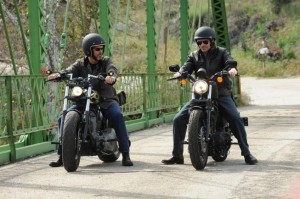 Anyone checking into the Series Finale of HOUSE expecting Dr. Gregory House (Hugh Laurie) to change his colors was given a little bit of a surprise.

“Everybody Dies” is a puzzle, the one’s House loves to solve, but it’s a different kind of puzzle – one that House needs to solve about himself.

When a resourceful drug addict shows up (James LeGros) with a strange ailment, House wants to solve his dilemma – but there’s more to this patient, than any other. House sees himself in this broken man who appears to be more of a man dying, than when he was living.

Wallowing in self-pity (and the potential of going back to prison), House decides to kill himself as he puts himself in a burning building. It doesn’t stop him from being visited by the ghosts of his past.

Some of these ghosts want to see him dead, others want him to fight to live. And all of this is compounded by his fellow colleague Wilson (Robert Sean Leonard) dealing with his cancer sentence and given only six months to live.

Of course, it appears that House has succumbed to death when the fire destroys the building and House’s burned body is found within it. This offers up a fun eulogy, but it would be a cop-out to kill House.

And, not surprising, he faked his own death, and  uses it as an opportunity to spend the last six months riding motorcycles across the globe with Wilson.

We’re also given a great end line for House when he tells Wilson “Cancer is boring.”

It’s rare to have a show where a character stays the same old curmudgeon he was during the first season, but that’s the beauty of HOUSE. Then again, it’s clear House has learned a thing or two about friendship – and those bonds are far more important than anything else especially in the face of death.

Creator David Shore has maintained the integrity of HOUSE from the beginning and with co-writing and directing the finale, he brings everything home. Yes, the flashback device is a little over-used on television, but it works rather well in piecing together the last puzzle House must solve.

Will fans love the ending – I’m not sure. It offers hope, perhaps something that might be diametrically opposed to what HOUSE has created over the course of eight years, but in many ways it is the perfect ending. Fox hit lightning in a bottle with HOUSE from the cast, the storytelling and Laurie’s uncompromising performance and it’s great that the series gets to go out on its own terms.

Also, props to Shore for using the superb and appropriate Warren Zevon song “Keep Me In Your Heart” from his last album THE WIND. The lyrics and music couldn’t be more appropriate and I’m surprised no one has used this song in this way on a TV series. Perfect and for those wondering what the song is, download the entire THE WIND album. It was written and performed by Zevon as he was dying of Cancer. One of the most brilliant and gut-wrenchingly honest albums of the 2000s and perfect parallel for House’s own brittle journey.