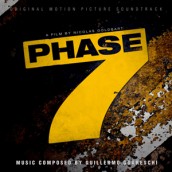 A pandemic in Argentina causes a quarantined condo to go bananas with expectedly arch, gun-toting anarchy.

But if you were only trying to decipher this disease’s effects from listening to PHASE 7‘s score, then you might think it was musical bacteria that caused you to chew bubblegum and kick ass. That’s how spot-on composer Guillermo Guareschi’s south-of-the-border replay of John Carpenter and Alan Howarth’s THEY LIVE is, from a slow, military march to its eccentric blues vibe. Thankfully, the score gets significantly more interesting as civilization really begins to break down, and Guareschi’s well-played homage starts to develop its own identity, bringing on a piano freak-out of “Swan Lake,” cheesy retro-horror synth tones and a strumming, Spaghetti Western-styled guitar.

By the time the PHASE 7 soundtrack reaches its apocalyptic alpha and omega Guareschi’s strain has pretty much mutated into it’s a distinctive, and thoroughly entertaining antibody, one that’s successfully assimilated its love of classically quirky genre scoring with its own black-humored edge. It’s a fun musical bug worth that’s worth catching.

Clink on the link to buy PHASE 7 soundtrack