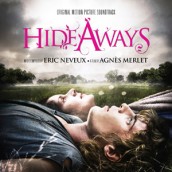 French composer Eric Neveux (INTIMACY, SITCOM) goes into the English woods with HIDEAWAYS, where a young man with death-dealing powers has chosen to hide from those he might unintentionally harm. That is until his solitude is interrupted by a girl already at the grim reaper’s door.

Thought the sight of the couple’s love blooming as flowers wilt about them lets us know this will be the stuff of ill-fated fairy tale romance, Neveux’s work is far more about hope, tenderness and even whimsy. His score conjures a magical Garden of Eden for these two lost souls, as gentle bells, soothing voices and bucolic strings make for a soundtrack caught somewhere between the verdant symphonic nature of William Walton and the dark, instrumental eccentricity of Danny Elfman.

Sure fate might casts its harsh shadow with ominous electronics and orchestral thunder in Neveux’s idyllic soundscape, but it’s the strikingly poetry of his melodies, as enchantingly captured for strings, guitar and piano, that assure love, and life will conquer all- a theme movingly summed up in Bless’ end title song “With Love and Faith.” For a Euro-composer centric label with a mission of introducing organically-produced scores, Movie Score Media’s release of another film that might not likely see the light of day over here produces one of its most rewarding listens, let alone finds in Eric Neveux.