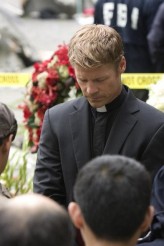 Another ho-hum episode with yet again nothing of interest happening

You know, having a Visitor around the house would be pretty handy. Any time you get a mouse infestation or a rat, you’d have the perfect defense … they’d just be able to devour it and be done with it.

Of course, this was the money shot that V fans have been waiting for since the beginning of the rebooted series began. The lizards in action, doing lizard-type things and being altogether evil. Now, don’t get me wrong, the Vs have been pretty bad up until now, but it’s been milquetoast for the most part. Hunting some people here, torturing some people there, but until the red sky thing – which in reality didn’t do all that much at least up until this part – the mass scale of their evilness has been put in check.

I guess “Serpent’s Tooth” might be the beginning of the evil. Watching Anna (Morena Baccarin) devour a large rodent and then feed it to the baby of Ryan (Morris Chestnut) was pretty gnarly, even if the CGI was so-so. Definitely it was a moment that most classic fans of the series have been wanting.

Still, I  just want so much more from the series. I want it to progress faster, get to the good stuff faster, get to the battle faster. I’m tired of watching a handful of rebels just doing a save a person of the week or deter others from waging war against the Visitors which was partially the focus of “Serpent’s Tooth.”

How does it make sense to kill potential recruits to the cause? Yeah, you may not be ready for the battle but why get rid of them. Stash them away for later or convert them into your cause. That’s the way to go. Not just get rid of them. That makes zero sense. I guess I can understand saving the lives of people that are innocent and not Vs, but rounding them up seems like a waste when you could just simply recruit them. They didn’t have an issue with the scientist from last week.

Obviously, this was just a hook to get the big reveal that Sarita (Rekha Sharma) is a Visitor and doing things to undermine the FBI, but it seems this could have been done without such a lousy storyline.

Man, I really hope they are going somewhere soon and important with this Jane Badler/Anna storyline because right now it’s boring as hell. Anna wants to fight her emotions so she turns to her mother that apparently lived on Earth for a long time before and has some knowledge on the subject. Really? This is the best they could do with her? Wouldn’t a storyline where she comes back with a vengeance in order to take the humans out or use them for food or steal their water and try to usurp her daughter be that much better? Having her try to retake her position or at least be as evil as possible in order to further their cause? Seems like a waste of a great resource at this point and an icon in the original series.

Hopefully, something will come of this because right now, it’s not even worth watching.

Two episodes into Season Two and there isn’t much of a difference between Season One. Things aren’t moving fast enough and we need more marquee events and resistance for things to change. Otherwise, I have a feel viewers will lose faith quicker than Ryan did in this episode. I, for one, will be one of them as I’m still waiting for something, anything, exciting to happen in this series.