Home » TCA 2011: George Lopez was okay with CONAN moving him to Midnight 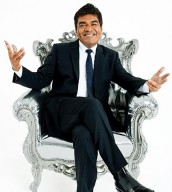 At yesterday’s TCA session, George Lopez chatted about his TBS talk show LOPEZ TONIGHT, the actor-comedian-talk show host says he was happy to accommodate Conan O’Brien and his new talk show coming over to the network as his lead-in. In fact, he’s almost Zen about it.

“I was replaced by cavemen on ABC,” says Lopez, referring to that network’s decision to cancel his sitcom THE GEORGE LOPEZ SHOW for a show about modern day cavemen. “To move an hour and bring in Conan – it’s nice to be at midnight and I was not unhappy. I’m here. He’s over there. It’s a nice partnership that can last a long time. They didn’t put a fancy air conditioner in [this studio] if we’re not going to be here for a long time.”