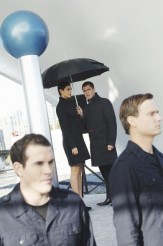 Bliss this. Bliss that. Bliss You. Bliss Me. Bliss us all!

V heads toward its second season finale next week with “Devil in a Blue Dress.” The title is an allusion to the Vs blue energy that will be used to not only power all the mother ships that are waiting (in stealth mode) right outside of earth’s orbit, but also the ability for the blue energy to destroy earthlings with a single swoop.

This is all part of the big plan by V leader Anna (Morena Baccarin) in her attempt to wipe out earthlings.

However, Anna is finding opposition within her own race. Not only from her daughter Lisa (Laura Vandervoort), but also key personnel – not to mention her mom Diana (Jane Badler) who is still hanging out in the basement of the ship waiting to escape and reclaim the throne.

Meanwhile Erica (Elizabeth Mitchell) is still trying to find out an effective way to send a message and take Diana down. This week’s plan involving the destruction of a blue energy reactor is a bust. The Fifth Column needs to make big moves, and so far, they’ve failed at every turn.

Add to that, Anna figuring out how to “Bliss” humans and everything is moving into place for a full-on alien invasion.

The campy aspects of the show continue with “Devil in a Blue Dress,” particularly with the Anna dialogue involving “Bliss.”

“Does this mean I can bliss a large number of humans,” says Anna.

“At this point I can’t be sure,” responds Joshua (Mark Hildreth) who remembers he’s part of Fifth Column during this episode.

“Blissing one human nearly killed you. Are you sure this is wise?” adds Marcus (Christopher Shyer).

Yes, this moment plays as silly as it sounds.

So is “Devil in a Blue Dress” any good? It’s hard to determine. The show has gotten increasingly convoluted over the last three weeks and the story, while obviously building to an invasion, is still evolving. The attempt to create its own vernacular works sometimes (“Concordia”) and fails miserably the rest of the time (“Bliss”).

My hope is with the season finale, big things happen, people die and the show sets the stage for a Season Three reboot that is a more in-your-face “resistance vs. Vs” scenario.

I like V and what it’s trying to accomplish, and it’s certainly less preachy and more fun than the similarly themed THE EVENT, but it’s taken way too long to get to this point. And when you’re praying for your own “bliss” that never comes, it’s a bad sign for a show that’s on the bubble like V.