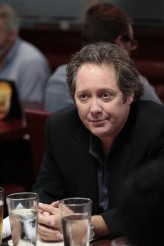 For future TV series that plan on losing a major cast member, let’s hold of THE OFFICE as a prime of example of how to handle their exit with class and an adequate way to transition into how the show will operate without their lead.

Instead of having the last episode of season 7 be Steve Carell’s last, instead, they had him exit a few episodes early. This gave the series time to try out the show with some heavy-hitter guest stars and also figure out how the expansive cast worked without their fearless leader causing chaos.

Now, with the Season 8 premiere “The List” things have settled in quite nicely. After searching for a replacement manager during the two-part season finale, Robert California (James Spader) was chosen. He’s the one with the crazy stare and Jedi mind tricks. However, after one day on the job he drove to corporate headquarters and managed to convince  CEO Jo (Kathy Bates) into giving him her job.

This resulted in a new manager being named from within the office.

The new manager ends up being Andy (Ed Helms). It’s a nice fit for the show, because Andy is much more aware and less neurotic in his need to please. The craziness that Carell used to bring to the show has been filled by California.  His shtick though is more weird and intimidating which will definitely give the writers new scenarios to play with.

The best part of THE OFFICE 2.0 is bringing back the unpredictable antics of Dwight (Rainn Wilson) – something we haven’t seen in awhile. Wilson got some of the funniest bits during the entire show.

The other big revelation is that Jim (John Krasinski) and Pam (Jenna Fischer) having another baby (to accommodate for Fischer’s real-life pregnancy).

I’m liking how THE OFFICE has rebounded from the loss of Carell. The show really developed into a big ensemble years ago, but it’s nice they had a chance to wrap things up and start things anew in the best possible way. Other shows like TWO AND A HALF MEN and LAW & ORDER: SVU didn’t have the luxury or ability to exit their lead actors out as classy and to most fans’ satisfaction.