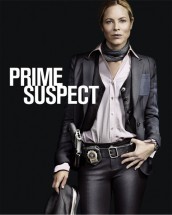 Not many television police dramas, or even television non-police dramas, can live up to the legendary 1991 BBC PRIME SUSPECT. Written by Lynda LaPlante, the miniseries stars Helen Mirren as Jane Tennison, the first woman homicide detective on a small North England police detective squad, much to the displeasure of most of the men working with her, not to mention the woman-hating title character she doggedly pursues over four episodes. The brilliant original gave birth to a number of follow-up miniseries, likewise starring Mirren. Most of them were pretty terrific also.

Maria Bello stars as Jane Timoney, a hard-working NYPD detective who has just been transferred to the homicide squad in a precinct new to her. Her new supervisor Kenny Rowe (Aidan Quinn) doesn’t seem such a bad guy, but most of her squad mates hate her even before one of their number drops dead and Jane gets his case. The dead man’s partner (Bryan F. O’Byrne) has particular animosity toward Jane, who is also trying to accommodate her boyfriend’s custodial issues with his ex-wife regarding their young daughter.

The procedural aspect of PRIME SUSPECT is reasonably good, though having Jane bond with the victim’s little boy is a bit much, as if to say, don’t worry, she’s still feminine. (The original PRIME SUSPECT didn’t give a toss whether Tennison appeared feminine or not.) The sexist hazing Jane endures at the precinct is somewhat over the top, though it reportedly will be toned down in future episodes.

Mainly, though, this PRIME SUSPECT wants us to like Jane, so she’s got some rough edges, but she’s within the comfort zone of what network television likes to present in a main character. This is entirely at odds with the original PRIME SUSPECT, where we respected (and even slightly feared) Tennison; we liked her because she was so ferocious. Not that this PRIME SUSPECT should strive to recreate this in Jane Timoney – what worked in one country and decade is likely not to work in another. However, there doesn’t seem to be any real risk-taking at all here, and that is where the invited comparison really hurts the new edition.

Bellois a fine actress and gives Jane depth, intelligence and warmth. The show is a good vehicle for her and there’s no reason to suppose it won’t be a decent procedural from week to week. It’s just that, based on the pilot, it doesn’t have the essential elements that we associate with the title PRIME SUSPECT.