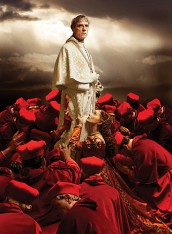 Just because a series is a period drama doesn’t mean that it’s an instant win with me. I’ve supported a lot of different period shows over the last several years such as, DEADWOOD, ROME, SPARTACUS, and more recently CAMELOT. Now Showtime is bringing us the story of THE BORGIAS, one of the first ‘crime’ families known in history.

THE BORGIAS is something akin to THE TUDORS, in the fact that it is not only a political drama, but also a period family drama with splendor and grandeur on a relatively epic scale. The back to back 2 hour premiere of the series with the episodes “The Poisoned Chalice” and “The Assassin” give a fantastic showing of a strong series that is cleverly executed.

Jeremy Irons leads a fantastic cast as Pope Alexander the 6th. Iron is his usual loveable bad guy, and you root for him to ascend from his position as a cardinal to the actual seat of Pope. Once there, he wastes little or no time falling back into his old somewhat sinister habits. Of course his son Cesare (François Arnaud) is truly the ruthless monster of the story so far, playing a ‘man of God’ who has absolutely no qualms about taking life if it is in the protection of his family, his father, and their aspirations.

It will be interesting to see how long we have to wait for Lucrezia Borgia (Holliday Granger) to blossom as the poisonous flower that we know from history, as she is kind, and innocent in these first two episodes.
Sir Derek Jacobi has a role that soon takes him to the sidelines, via some well placed poison, but while he is on-screen his additions to the cast are noteworthy. In fact, the entire cast is well-rounded and excels with not only the subject matter but also the stilted langue of the series.
The sets and costumes are lavish and are honestly some of the best ‘”costume porn” that I’ve seen in a long time on a TV show. It’s interesting to compare this to CAMELOT on Starz, because CAMELOT is the founding of the British Empire, and so the costumes are fantastic, but they don’t get to be as lavish as if they were funded by the Roman Catholic Bankroll.
I feel that the intrigue and deviousness of the Borgia family will keep audiences seduced into watching just to find out what they are going to get up to next. Overall this is yet another feather for director Neil Jordan to put in his cap, and I’m excited to see where it is going.