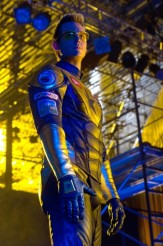 A new superhero comes to town and so does the Blue Beetle, but the Man of Steel is a few episode's away 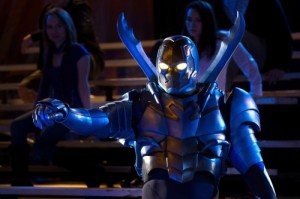 From the previews of the new SMALLVILLE episode “Booster”, it looked like a disaster in the making. A gold-plated superhero-for-hire named Booster Gold (Eric Martsolf) flies into town to one-up The Blur with his showy theatrics which include revealing his face to the public.

However, as the episode progresses, it becomes a story about what it takes to really be a hero, and again, is yet another lesson for Clark Kent (Tom Welling) to learn on his way to becoming whatsisname.

When Booster first shows up, he knows everything about the present and he seems to know a bunch about The Blur too – and he wants to steal his thunder. The truth is, he comes from the future and he’s a glory hound, but he’s in it for the wrong reasons (fame and money).

Meanwhile, a young boy named Jaime Reyes (Jaden Brandt Bartlett) ends up getting taken over by an extraterrestrial blue scarab and becomes the metal plated Blue Beetle. He can’t control this new armor which starts shooting at innocent people, but soon Jamie finds a way to control the suit and has a choice to become a hero instead.

The rest of the episode focuses on Lois (Erica Durance) getting a big promotion and making Clark into a big doofus with his glasses and his clumsiness so when he eventually debuts himself as The Blur (and puts a face to a name), people won’t go, “oh, hey, that superhero is Clark Kent”.

This of course provides the episode with tons of fun little moments. It’s great to see Welling play a less confident Clark and it’s also nice to see a Lois encouraging him to be less than who he is in his mild-mannered guise. It’s part of the Superman mythology and it really is wodnerful to see the seeds of the mythology we all know and love locking into place.

Booster also recommends to Clark that he come up with a better name than The Blur – something that’s a little more “super” and that incorporates the “s” on his chest. Okay, corny (and a little too convenient), but alas, another nice nod to the future. 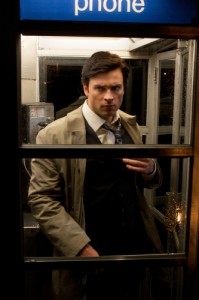 Oh, and we also get the infamous changing in a phone booth scene, though, it’s still a bit weird nowadays to have a phone booth anywhere (we’re a cell phone world). So as much as this is a shout-out, it’s also fudging things a bit with our modern world technology to think that a phone booth would be conveniently located in a place when Clark needed one.

One strange thing I’ve noticed in this episode and last, is the feeling that certain scenes have been excised for time. There’s so much material the writers are trying to cram in, it feels like certain stuff is left on the cutting room floor which could smooth over the pacing.

For example, in “Booster,” Booster is almost killed by Blue Beetle, but Clark as the Blur never steps in. He lets Booster sort things out with the Blue Beetle. What was Clark doing? What delayed him?

Kudos continues to go out to Durance who is making us fall in love with the idea of Lois all over again. She’s so good and infectious, that she’s taken Lois and given her more depth and substance than any Lois before her.

“Booster” ends up being much better than I initially anticipated it to be. It’s one of those slightly silly SMALLVILLE episodes, but it provides so much back story of where things need to be in three weeks, that it’s yet another solid entry in the final season of SMALLVILLE.

The Man of Steel is coming and he’s going to be “super” indeed.