After a good run, a pretty bad and uninspired episode 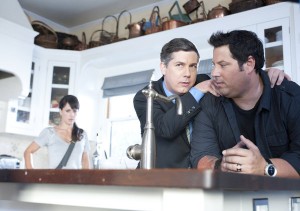 It was bound to happen, but LOVE BITES takes a huge step backwards with “Stand and Deliver” after several weeks of striking a nice balance between its characters, storytelling and comedy.

Nothing works in “Stand and Deliver,” which is a shame since I think this show has improved considerably since the pilot.

The big issue comes back to storytelling and the guest cast – and this week it’s weak on all fronts (aside from Beau Bridges) using tired cliches and silly “sitcom-like” concepts that don’t develop into fully fleshed out ideas.

First up is “You’re My Hero” about an under-achieving guy named Sam (Ben Feldman) who still works in the trophy shop with his dad Hal (Bridges) but doesn’t have any trophies of his own. He’s a bystander, not a doer, which has led to his girlfriend Prudence (Anna Camp) to dump him (or in her words, “take a break” from him). Then, he discovers she’s actually dating his baseball hero Dante Evans (Brian White), which leads to a dinner, which leads to Sam claiming he can strike Dante out on the field when he finds out he’s cheating on his ex.

Awful and the pay-off where there’s still hope for Prudence and Sam is ridiculous – Prudence is just as shallow and inconsiderate as Dante. They deserve each other and Sam deserves better.

“A Sexual Haunting” is just as bad – a funny idea if a comedian were on stage talking about it for a minute or two, but as a whole segment, it’s just plain bad.

This one features regular characters married couple Judd (Greg Grunberg) and Colleen (Constance Zimmer) as they’re looking for a new house with their realtor (Chris Parnell). The problem is the house they like is a place that Colleen had sex out before they were married. This requires Judd to become a “sexorcist” (yes, it’s as bad as it sounds). The rest of the segment isn’t any better – and it should have been as half as long as it was. The idea doesn’t sustain itself. 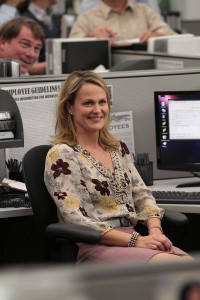 Finally, there’s “Not To Speak” about office worker Julia Clark (Emily Rutherford) who has a boring life, but ends up having a passionate Brazilian vacation with Marcelo (Cristian de la Fuente) who she met there. She leaves, and goes back to her normal life as Marcelo follows her home. Soon she must choose between having the dream guy from a dream vacation in her normal life or just have the memories of the dream guy while she works toward that dream promotion she’s been looking forward to.

I think when LOVE BITES works is when it manages to ground itself and find a way to be cute and clever without being over-the-top. One over-the-top segment is enough per episode – there needs to be a balance of different types of tones and themes in the other segments to make things work. Here every idea is too preposterous and the heavy casting of sitcom stars and comedians doesn’t balance things out. Even the best segment of the group (and that term “best” is used lightly), “You’re My Hero”,  just doesn’t come together quite the way it should.

I’m willing to give LOVE BITES a second misfire, since it’s been on such a good roll as of late. You can’t win them all, it’s just I thought the show had finally found its voice and a way to provide mindless, silly summer fun. Instead, like many series, it struck out completely.

However, the one thing that saves it from a D grade is the clever integration of the Simple Minds song “Don’t You (Forget About Me)” which is peppered thematically in each of the three segments.

And when Simple Minds is your only saving grace, you know something is seriously wrong.