Some funny gags in a gender-bending season premiere 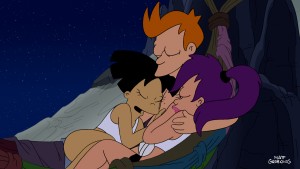 After the gender-bending episode of Season 6A “The Prisoner of Benda” which allowed the Planet Express crew of FUTURAMA to switch brains, the Season 6B premiere of the Comedy Central series takes things one step further with gender re-assignment for the entire cast of characters.

“Neutopia” begins with Planet Express broke and no money to keep their operation going. Eventually they decide to start their own airline to save their jobs. Of course with Fry (Billy West) flying the ship, they crashland on a planet inhabited by a rock creature who doesn’t understand the concept of gender.

With the male and female passengers and crew constantly bickering, the rock creature tests these strange creatures. First, he tries to figure out who is the dominant race and it fails. Next, he neuters everyone, making it an even playing field (it’s a bit boring and harmonious). Then, he switches the sex of everyone – and then is subsequently obliterated by Zapp Brannigan – leaving them in their new bodies.

The episode challenges the notion of gender, but does so in some pretty obvious ways. The set-up too is a bit heavy-handed (we see how chauvinistic the guys actually are in the beginning, so their comeuppance as women later is a lesson learned). However, the guys end up liking their new bodies more than the women (for Fry, he notes when he says dumb things as a woman, people buy him things).

While there are some laughs, and it’s always great when FUTURAMA plays around with its sci-fi conceits, “Neutopia” just doesn’t quite succeed as much as it should (and especially for a season premiere). Still, it does have the hilarious “girl calendar” segments which are actually pretty funny (and disturbing) for die-hard FUTURAMA fans.