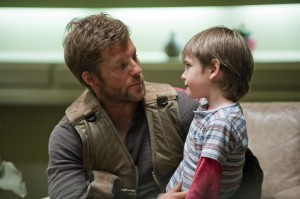 In BBC America’s new science-fiction series OUTCASTS, the Earth of the future is more ecologically messed up than it is in our present, especially following a catastrophic war. Seeking a better environment both physically and psychologically, humans settle on the planet Carpathia, but they are in for some surprises from within and without. The show stars Liam Cunningham, Eric Mabius and BATTLESTAR GALACTICA’s Jamie Bamber.

Series creator Ben Richards, who wrote all the scripts for OUTCASTS (he was previously a writer on MI-5) gives us some exclusive insights into his brave new world.

ASSIGNMENT X: How did you go from MI-5 to outer space? Is there a natural progression in there somewhere?

BEN RICHARDS: I started my life as a novelist, MI-5, or SPOOKS, as it’s called in Britain, was my first TV work and none of my novels had anything to do with either spies or outer space. So both [MI-5 and SPOOKS] were quite a leap, really. I actually really like genre television, because I think it actually allows you to tell human and emotional stories. Often, rather than restricting you, genre liberates you. I find the format of both spies and sci-fi actually quite exciting, because it gives you the narrative drive you need. So they’re not massively different. In MI-5, I guess it’s much more sort of story of the week, or threat of the week, which our heroes resolve, and OUTCASTS is much more serial and much more open-ended, each episode.

AX: Have you seen FIREFLY, because OUTCASTS has a low-tech in outer space aspect that is also present in FIREFLY.

RICHARDS: Do you know what? I haven’t. I don’t have a massive background in sci-fi, and sitting on my shelf at home is an unwrapped box set of FIREFLY, which I’m desperate to see, because I’m a big fan of Joss Whedon, and FIREFLY has a really, really good reputation in Britain and I haven’t seen it yet, but it’s something I’m really looking forward to, and it sounds as if there are certain similarities. FIREFLY has horses, that feeling of both old and new, of the Western wedded to the sci-fi, is very much part of what we’re trying to do.

AX: Because your characters are interplanetary settlers?

RICHARDS: They are settlers, yeah.

AX: Eric Mabius’ character Julius Berger appears to be the antagonist. Is he actively malevolent or is he just trying to arrange things in a fashion that suits him but is problematic for everybody around him?

RICHARDS: I think Berger is very interesting and I think Eric adds a whole new dimension to Berger and made him less actively malevolent than was originally conceived. Berger’s been through quite a lot of changes. When I started off, he was supposed to in some way represent faith versus reason, and I quickly got quite bored with that, because I found actually it was very limiting to make the religious guy the bad guy and make him a bit of a fundamentalist. So we shifted away from that quite quickly. I want people to ask that question – is he bad or isn’t he? What does he believe and what doesn’t he believe? He certainly is a player and he likes manipulation and he enjoys manipulating people. What his actual final agenda is, I’m not sure he himself completely knows.

AX: With a name like Julius Berger, is he sort of a Jewish fundamentalist preacher?

RICHARDS: No [laughs]. That’s very interesting, actually – the subject of people’s ethnic ancestry comes up in one of the episodes in precisely that way, which you’ll see when you see it. Interestingly, a lot of the characters have Jewish surnames.  No, he’s not fundamentalist in that sense, and he’s not actually conceived of particularly as having Jewish ancestry, but more that he actually comes from more of this spiritualist, slightly New Age-y – I was saying to Eric that it’s all over the Internet, people who, rather than talk about things like God, they talk about the universal spirit, they talk about the life force – [Berger has] had a kind of epiphany on the transport and he’s embraced religion fairly straight on in his life. Or he’s embraced – he wouldn’t even call it religion. He says God is a device, but he embraces his spirituality.

AX: And everybody else is embracing survival?

RICHARDS: This is where we had to make some changes. President Tate [played by Liam Cunningham] is very much secular. In some ways, Tate is like one of the earliest socialist Zionist settlers, and he absolutely believes that this is a chance to start anew and to free the settlement from the vices that have corrupted [Earth society] – he’s very much a communitarian, he’s very egalitarian. He doesn’t believe in luxury or the trappings of power or anything like that, and Berger thinks that his ambition is limited. That’s the big difference. There’s a line in episode eight where Berger says, “Your vision is frayed at the edges,” and Tate actually considers and says, “Yes, that’s right. I don’t mind being frayed at the edges, because the missiles that destroyed Earth were not frayed at the edges. They were absolutely smart, gleaming and slick.” And that’s I think their discrepancy, that Berger actually believes Tate’s vision is limited and small-scale. 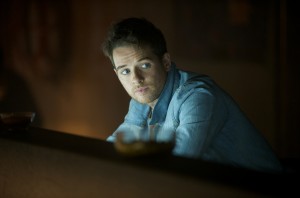 AX: Does this have anything to do with the native population of the planet Carpathia?

RICHARDS: There are three big elements in the show. One is the host life form on the planet that [the settlers] only gradually start to discover, and what its aims are and what it actually implies for them. We wanted to do something where we weren’t doing the conventional aliens which were little green men with wavy antennae – we wanted something much more interesting than that in terms of what a super-species that has evolved further than what humans might be, what it might represent. And then there’s another group who are – without giving too much away – the actual true outcasts, in that they are part of early Carpathian society who, for reasons which will become clear over the course of the episodes, have been outcasts from the settlement itself, so you have genetically modified humans and you have a life force on the planet, and you have the people from within the settlement. You have these three forces in competition and that allows us to pose lots of questions about what does it actually mean to be human, and also, I think, how the humans treat not just other humans, but other species, and if we came across a force more powerful than ourselves, on what grounds would we ask it for compassion and mercy, given our own lamentable treatment of other species.

AX: How did you arrive at casting Eric Mabius and Liam Cunningham?

RICHARDS: I didn’t have a great deal to do with casting, per se, so it’s a bit of a difficult question for me to answer. Liam Cunningham we knew from HUNGER and we absolutely loved his performance in HUNGER, and I think the minute he expressed an interest in [OUTCASTS], we knew that we’d found our President Tate, because he has that mixture of gravitas and sincerity that we really wanted Eric Mabius arrived via BBC America, as far as I understand, but again, I didn’t have a major part to play in casting. Having said that, I was a big fan of UGLY BETTY, so I was absolutely delighted when I heard he was going to play Berger. And as I said, I think the best thing about it is, he’s given a dimension to the character which is always delightful when that happens, when you write a part and then the actor takes it on and makes it his own, adds a new quality to it, which has been really, really satisfying to me. I hope that people will also find humor in [OUTCASTS], because although it addresses big moral questions and big political questions, again, particularly with Eric’s performance, he brings a lot of really nice, quite gentle humor to quite a big, meaty part, and there are parts in it that are actually funny, so I hope people, when they see it – it’s not a big show, but it’s not a depressing show, it’s not humans surviving against all the odds. It’s actually a show that I think shows that humans can be good to each other and not just bad to each other, and cooperate as well as have conflict.

AX: Did the reality of shooting in South Africa affect the writing or the concept of the show in any way? Was there something about the terrain that informed what you’re doing?

RICHARDS: It did later on. It didn’t affect the earlier episodes, because they were written before we decided to shoot in South Africa. It was very interesting – I can’t imagine any other place that it could possibly have been shot now, literally. It was a BBC Wales project, and we looked at the possibility of doing it in Wales. The problem is, anywhere you’re trying to persuade people is another planet is a tough call, and the more it looks like Britain, the less likely a British audience is going to believe they’re on another planet, but when we went to South Africa and looked around the locations, it was so amazing, and the closest I think we could ever possibly get to being on another planet. It became an obvious and natural choice. And then having seen it, the dunes, for example – there are these amazing white dunes called the Atlantis Dunes, which I think other sci-fi movies have sometimes used, so it’s just white sand stretching across these dunes down to the ocean, and then you’ve got the mountains, and you’ve got so much variety that I then started trying to make the scripts fit around those landscapes.

RICHARDS: Very much so. I mean, you have to be very careful. Sometimes when sci-fi annoys me is when I can see the writer coming from behind the characters to deliver this huge, weighty lecture about human nature. I’ve tried very hard not to do that. Having said that, it is very much about human nature. That is the big theme of the show and there are all kinds of arguments about morality and where morality comes from – does it come from an external religious source, does it come from ourselves, how much is it molded by circumstances? And also, increasingly, how much is it molded by genes and genetics? Genetics is a big issue that becomes much more of an issue later on in the series and I think the conclusion that the characters come to is, ultimately, we have to be responsible for designing ourselves, whatever our circumstances are or our genetic makeup, we still have some control over our destiny and here we are as humans. I think that’s the big message of the show, if it has one.