Inspired lunacy, with big love for all kinds of animation 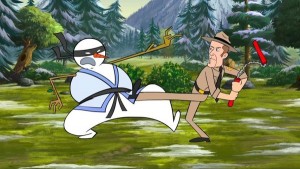 Animation takes over the EUREKA world for the Season 4 Christmas episode - "Do You See What I See?" | ©2011 Syfy

Once in awhile, a TV show makes an episode that is both so good and so completely insane that one feels safe in showing it to people who have never seen the series before and may never see it again. EUREKA can now proudly join that select company with its fourth-year Christmas special, “Do You See What I See?”

Sarah the sentient house (voiced by Neil Grayston) introduces this tale of a Christmas Eve that goes awry in typical Eureka fashion. Sheriff Jack Carter (Colin Ferguson), robot deputy Andy (Kavan Smith) and chef Vincent (Christopher Gauthier) have whipped up a device that’s supposed to make it snow for Christmas, Global Dynamic head Fargo (Neil Grayston) and science whiz Henry (Joe Morton) are working on another project, and Allison (Salli Richardson-Whitfield) has left the kids alone briefly to get a battery for one of little Jenna’s toys. Allison’s son Kevin (Trevor Jackson) and Jack’s daughter Zoe (Jordan Hinson) figure it won’t hurt to let Jenna unwrap one present, which turns out to be something called Holotown.

Holotown looks like a book, but it functions as a sort of Sims program. Since it doesn’t have its battery (that’s what Allison went out to fetch), Kevin improvises a power source. Wouldn’t you know, this interacts with the would-be snow machine and some other form of techno-whammy to cause … animation.

And not just any animation. While Kevin, Jenna and Zoe, protected by Sarah’s force field, remain blissfully unaware of what’s going on in the rest of Eureka, the residents cycle through turning into videogame CGI, Charlie Brown, Matt Groening and SOUTH PARK-style identities before settling into Rankin-Bass Claymation. Jack’s police jeep can suddenly talk (voiced by guest Jim Parsons), Australian scientist Taggert (Matt Frewer) is a polar bear, Jo (Erica Cerra) is in princess garb that she hates, and a giant snow ninja is terrorizing the town. The only solution is one more style of animation. 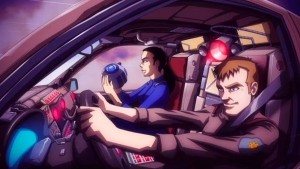 Animation takes over the EUREKA world for the Season 4 Christmas episode – “Do You See What I See?” | ©2011 Syfy

The writers revel in the conventions of each iteration of animation – “Jo White,” as Jo aptly dubs her look, has bluebirds when she’s 2D that vanish when she’s Claymation; she spends the rest of the episode worrying about them. Andy’s suddenly primitive apps include some classic cartoon gags, there’s use of Wile E. Coyote’s favorite vendor,Fargois dazzled by his suddenly anthropomorphic button console, etc. References fly by like snowflakes in a blizzard.

It’s also a trip to see what all of our well-known characters look like in each different type of animation. The amount of work that must have gone into this is awe-inspiring, and it pays off wonderfully.

Parsons seems to be getting into all the cool stuff this season (see also his participation in a certain current hit film) and Edward James Olmos gets in on the action by voicing a normally silent sort of character who gives new perspective to Andy.

The entirety of “Do You See What I See?” is truly a great holiday TV present. Thanks, EUREKA!

Article Source:Assignment X
Article: Review: EUREKA – Season 4 – “Do You See What I See?”