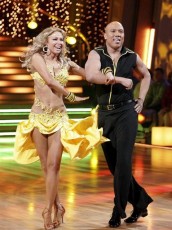 Macchio slips from the top, Alley falls while Ward and Nemcova tie for first!

There is a new champ in the DWTS town. Normally weeks go by without anyone taking out a front runner, not so Season 12 of DANCING WITH THE STARS.  Hines Ward, who slowly and unnoticeably crept up upon the heels of first place helmer Ralph Macchio last week, overtook the Karate Kid this week placing first with a score of 25 and tying with Petra Nemcova who came from nowhere and up’ed her game in week three as well. Macchio received a solid 21 for his Rumba but slipped to third tying for that spot with Kirstie Alley and Chris Jericho. In second place there was another tie. Kendra Wilkinson and Chelsea Kane both scored a 23.

Here’s the rundown of this week’s dancers.

Chelsea Kane (Disney Channel Star) and her partner Mark Ballas
She brought sexy back! She looked good doing the Cha Cha Cha and followed the rules this time. Bruno Tonioli laid it out there, “sexy, sexy Chelsea Chelsea!” And Carrie Ann Inaba said she was a big fan of that Cha Cha Cha. Len Goodman told the Disney star that was her best dance to date.
Scores: Inaba – 7, Goodman – 8, Tonioli – 8, Harland – 7

Wendy Williams (Syndicated Talk Show Host) and her partner Tony Dovolani
The party might be over for talk show host Williams who is removed from the pack by 5 whole points. Goodman called her Foxtrot a dance more suited for the radio. Tonioli told Williams to get rid of that blockage in her passage. Inaba insisted there is more of her inside that she is not showing us!
Scores: Inaba – 5, Goodman – 5, Tonioli – 5, Harland – 6

Hines Ward (Football Star) and his partner Kym Johnson
Wow! Last week it looked like he had no charm or charisma to pull it off. This week he is full of it – charm and charisma that is! Shockingly he was Samba’ing like he’d done it all his life. Inaba said baby’s got back! Goodman became fatherly telling Ward that he was proud of him. Tonioli claimed the hour to be “Happy Hour”.
Scores: Inaba – 9, Goodman – 8, Tonioli – 8, Harland – 8

Petra Nemcova (Supermodel) and her partner Dmitry Chaplin
This girl came out of nowhere and conquered the dance floor.  She nailed her Waltz and wooed the judges, tying her for first place with Ward. Goodman said in that moment she was “the one”. Tonioli likened the model to an angel. Inaba said Nemcova was inspiring.
Scores: Inaba – 8, Goodman – 9, Tonioli – 8, Harland – 8

Romeo (rapper/actor) and his partner Chelsie Hightower
Romeo’s Rumba failed to impress the judges although it was still a sweet and tender performance dedicated to his two cousins who died suddenly and tragically. Tonioli recognized the heart and soul Romeo put into his dance. Inaba agreed, saying the emotion was evident. Goodman was not sympathetic saying the dance was a huge step back.
Scores: Inaba – 7, Goodman – 6, Tonioli – 7, Harland –7

Kendra Wilkinson (Reality TV Star) and her partner Louis van Amstel
Poor Wilkinson was smoked out with a fog machine and couldn’t find her way to the dance floor. However, once she got there, she made it worth the wait. Although Goodman thought there was unnecessary gyrating going on Tonioli thought there was nothing wrong with a good stripper. Inaba, too, thought Wilkinson’s Rumba was, hot, hot, hot.
Scores: Inaba – 8, Goodman – 7, Tonioli – 8, Harland – 7

Ralph Macchio (Actor) and his partner Karina Smirnoff
His performance was so pure and so tender, yet it received little acclamation from the judges. Goodman told Macchio his Rumba needed refinement. Tonioli said he had spatula hands, but Inaba thought the dance was very sweet.
Scores: Inaba – 7, Goodman – 7, Tonioli – 7, Harland – 8

Chris Jericho (Wrestler) and his partner Cheryl Burke
His mom loved dancing and he certainly made her proud from above with his Rumba. Inaba pointed out that to Jericho who held back tears, but Goodman, not one to ever get teary eye’d stated the dance lacked fluidity. Tonioli agreed with Goodman saying Jericho needed to link his lines.
Scores: Inaba – 7, Goodman – 7, Tonioli – 7, Harland – 7

Kirstie Alley (Actress) and her partner Maksim Chmerkovskiy
What happened!? It started out beautifully and then all of a sudden both Chmerkovskiy and Alley were on the floor! Chmerkovskiy’s thigh went out in a pivotal moment and he was brought down along with Alley, but they held strong, got up and continued the Rumba to receive some pretty decent scores considering. Inaba still told Alley that she stayed so connected to the music. And even grumpy Goodman said they came back stronger after the tumble. Tonioli agreed that it got better than before.
Scores: Inaba – 7, Goodman – 7, Tonioli – 7 Harland – 7

Sugar Ray Leonard (Superstar Boxer) and his partner Anna Trebunskaya
He’s fun to watch. He is entertaining. He is an icon. But is that enough on DWTS? We’ll find out tomorrow. Tonioli was frustrated with the champ saying he still needed to refine his Spanish lines. Inaba thought she saw some improvement but seemed unsure. Goodman on the other hand said, “You fought back!”
Scores: Inaba – 7, Goodman – 6, Tonioli – 7, Harland – 7

Who’s going home: No doubt Williams has danced her last waltz. The only thing that can save her is if Leonard’s fans don’t watch DWTS. The race to become second off the dance floor is undoubtably between Williams and Leonard.

Who Has Legs To Take Home The Mirror Ball: There are now so many possibilities, it’s anyone’s game, well except for Leonard and Williams.

For photos of tonight’s performance, see the gallery below.

WHO GOT VOTED OUT in WEEK 3? CLICK HERE to find out