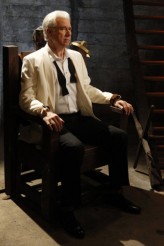 The team needs a bad guy and a mission, what they find is John Larroquette 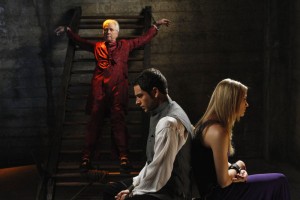 When domestic issues at home become too overwhelming for Chuck (Zachary Levi), Casey (Adam Baldwin) and Sarah (Yvonne Strahovski), they realize they “need a bad guy” and a “mission” in “Vs. The Seduction Impossible” episode of CHUCK.

Consider this a nice little treat for die-hard CHUCK fans. After a first half of the season showcasing the Big Bad villain played by Timothy Dalton, we get a one-off that brings back one of the most memorable spy characters Roan Montgomery played by one of the coolest guest actors the show has had – John Larroquette.

Montgomery is what happens when a super spy ages, but still has what it takes to get the job done.

When he ends up missing in Morocco on an off-the-books mission, General Beckman (Bonita Friedericy) sends in our trio  to retrieve him.

What we learn is that Beckman and Montgomery have had an on again/off again affair for over twenty years. They made a promise that after 20 years of this, and if they were both unencumbered, they would settle down and grow old together.

Well, Montgomery didn’t keep his end of the bargain – and domestic strife continues to follow the team into the mission which also finds Chuck and Sarah arguing about a big wedding vs. eloping.

Along the way we get Sarah in a sexy belly dancing costume – which we could certainly use more of on the show, Casey tempted to reveal to his wife that he never really died and Mom Bartowski (Linda Hamilton) getting permission from Ellie (Sarah Lancaster) to not only be an awesome grandmother, but also to continue spying if that’s what she desires.

While there isn’t a bunch of Buy More subplots this episode, there are some wonderful moments between Sarah and Chuck – particularly when we realize that Sarah’s been supportive of putting Chuck’s family back together, but Sarah still has family issues with her own family that Chuck wants to get to know more about.

Seeing Beckman become a “hot mess” as Chuck puts it is also a delight – especially when she pulls out a bazooka by episode’s end to help save Roan.

It’s also nice to see the continual development of the weird relationship between Casey and Morgan (Joshua Gomez). The two of them are such an unlikely pair, but as Morgan continues to date his daughter and Alex (Mekenna Melvin), it’s giving them so much more to play with.

The action in the episode is strong, the character moments sublime and the episode ends with a geektastic nod to Linda Hamilton’s past as the TERMINATOR theme (or an homage to the theme) plays out the last few moments of the episode.

Once again CHUCK delivers, and it’s been Seasone 1 since we’ve seen  Montgomery pop up on the show – let’s hope we don’t have to wait another three years for a return visit.