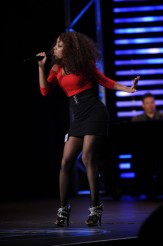 Another solid episode. It's the best look of this round we have ever seen

I really wish that they would have started this year’s AMERICAN IDOL in Hollywood. It would have not only saved me some time in my life, but it would have given us an even greater insight into the whole process of deciding who gets to perform for America and who does not.

Don’t get me wrong, I have been more than happy we have gotten as much as we have as we have not had this type of access or interest paid to the process until now. But still, I kinda want some more. I want the process to be more about the singing right from the get-go rather than this deep into the season already. We’ve seen the freaks and bad singers, we don’t need to see them anymore. Show us the talent, that’s what makes this show special.

Still, this last day of “Hollywood Week” delivered as we got a slew of performances in the individual segment – moreso than I think ever in previous years – and that made it good. We got to see why those that moved on did and why those that we had a hefty dose of TV time didn’t.

So that’s good indeed. That’s the kind of behind-the-scenes stuff this show as needed for years, and I welcomed it.

Some the outstanding performances came from:

Some of the more disappointing performances came from:

So now with the competition down to 50 people, we’ll see just who continues to shine and who will falter.

CLICK HERE for our continued news, interviews and reviews of AMERICAN IDOL