Home » THE X FACTOR Season 1 Recap: Nothing to Crow about as Rachel Crow gets her heart ripped out by Nicole Scherzinger 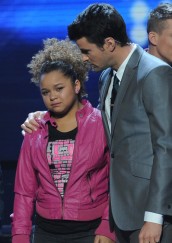 It's down to four - three guys, one gal. How much longer will Melanie Amaro remain?

Here’s the problem with having 13, 14, or 15 year olds competing on reality programs – they’re not mature enough and emotionally not ready to take on the big hurdles these kind of shows present.

And THE X FACTOR has proven all season, its youngest contestants may be talented, but to be thrust into the dog eat dog world of the entertainment industry is a dangerous, slippery slope.

First, we had the arrogance of Astro refusing to perform when he was in the bottom one week. Last week, the judges unfairly ousted Drew (one of the best contestants on the show) and kept two-time bottom artist Marcus Canty. Drew was a wreck and Simon Cowell, her mentor was pissed that Paula Abdul and Nicole Scherzinger decided to play a game of SURVIVOR instead of play a game of “who is the best contestant.”

And now, this week, we have Rachel Crow (powerhouse talent, occasionally saddled with poor song selections) and, yes, once again, Marcus Canty in the bottom two.

When they both sang their “save” song, it was clear Rachel Crow hit it out of the park with one of her best performances to date. She really sang the song well – nailed it and proved why she should stay. And then what happens? L.A. Reid sticks with his guy Marcus (acceptable), Simon sticks with his girl Crow, Abdul sticks with Crow and then Scherzinger offers up a bunch of crocodile tears and refuses to vote out either contestant (bull), and decides to put the contestants in a deadlock with the lowest vote getter via the public making the final decision.

And whammo! Canty is saved again. If this were IDOL, he would have gotten the boot. How many times in the bottom does he have to be?

Here’s the horrible part though – Crow had a breakdown on stage. Like Drew last week, it was AWFUL to watch. And then to see Scherzinger trying to curry favor by crying too. She should have saved Crow. She gets no sympathy. It was clear Crow won the “save”, yet she couldn’t give it to Cowell.

And the whole world had to watch a little girl wonder why no one voted for her. This is not entertainment – it’s torture. I felt so bad after watching the show, that I was kind of glad the younger contestants were gone so we wouldn’t have to go through this kind of horror show again. This borders on child abuse.

Yes, I’ve been critical of Crow’s song choices, but I have always given her props as an amazing performer with rich vocals for such a young age. Yet, if I were to judge by the two elimination songs – it was no contest. Crow would have got it.

So here’s the thing – if you’re going to be a judge on this show. Stop holding grudges and judge. And then don’t pretend you’re sad, when you had the power to make the right decision.

I think Scherzinger is probably perceived as “good” TV by the producers (hell, maybe even by Cowell), but her snotty rich bitch attitude and insincere indecisions is grating. She doesn’t add much to the show and I would rather see someone else in her spot come next year.

Vote her off now – see how she handles it (you’ll get no tears from me).

And one other thing. This morning ASSIGNMENT X received a press release touting the gown Scherzinger wore last night by a brand name designer ( I refuse to promote it officially, sorry) and how that gown will be named after her and portions of sales will be donated.

Oh well, so, yes, Crow has been eliminated. Canty gets to sing another week and THE X FACTOR is starting to suspiciously resemble the same AMERICAN IDOL dynamic where the guys out number the girls. Good luck Melanie, because, as good as you are, there’s not way you’re going to last the reality show singing imbalance.