A smooth, slick ride with a dashboard full of bells and whistles that makes you feel like a superhero driving it 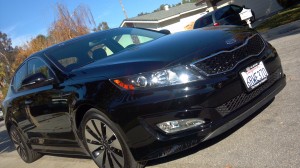 Reviewing cars is a brand new thing for ASSIGNMENT X, but, as cars begin to feel like moving super computers all on their own, it was about time to add them to our pop culture review diet.

Granted, we’re not car experts, we just know what’s cool and what works for us as consumers, which is how we’ll approach our first car review in our magazine.

It’s been some time since my family’s last car purchase (2002 to be exact), so getting to drive around in a brand new 2011 KIA Optima SX was definitely a treat. Welcome to the future.

Things certainly have advanced technology-wise. The Optima is right out of a science-fiction film with all the bells and whistles it has in its dashboard, steering wheel and center island. This thing is loaded. The only thing missing is a built in computerized I SPY game to keep you busy on those long rides.

Fuel mileage is another huge improvement – with a full tank of gas lasting nearly a whole week (and approximately 380 miles).

The Optima is a sleek looking car. The one we had was solid black and it has amazing curves and a nice design to it. My daughter loved the fin on the back that gave it a Batmobile kind of cool factor and I personally thought the highly styled tire rims were James Bond sleek.

The interior seats are incredibly comfortable, with the ability to adjust the driver’s seat to two, pre-set positions. That way if someone likes it set up one way, they program themselves in the “one” spot, so after a different person is driving, they can go right back to the place that they enjoy.

The front seats are also built with individual heating and cooling. The freezing days we were driving the vehicle – the hot seat came in very handy and eliminated having to use the dashboard heater in many instances.

The back seats have the ability for  “heat” only.

As cool as this is though, the heat/cool seat buttons are actually on the other side of the gear shift, so for the driver, it can sometimes be distracting reaching over and getting the right temperature. 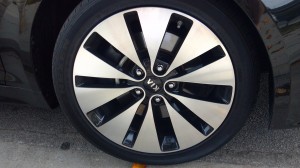 The dashboard includes not only a solid GPS, but also the ability to plug in your iPod and control it from the dashboard. Although the iPod interface isn’t as nearly intuitive as the iPod itself, there is the added plus that you can skip songs with an easy click of a button on your steering wheel. There’s also a volume control on the steering wheel as well.

The dashboard screen also uses a camera mounted to the back, so when you back-up you can see the distance of the objects behind you. There’s a three-tiered level to this – so if you’re edging closer to the red – watch out. I didn’t put this function to the test (a little paranoid about getting too close to hitting something), but it is a very smart function.

There’s also a way to connect your phone to the car – so you can drive hands free. Again, a feature I didn’t get a chance to fully test out, but it does add to the safety of the vehicle.

One of the more impressive parts about the car are the dashboard lights which have a very original luminescence. It has a white sheen to it, but it’s not overly bright either. It adds to the uniqueness of this vehicle – and that you’re in a car that knows it’s cool.

I also dug the shiny, well-designed gas and brake pedals. I love the look of this car.

The car turns on, not with a key, but with a button. It only turns on when the remote is inside the vehicle, so that’s a good thing. 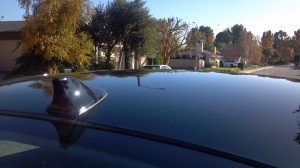 I’ve never been in a car as quiet and smooth as the Optima. This thing runs like a champ. We tested the car out around town, and it got the job done. Then during Thanksgiving weekend, we drove it out of town to get more of a feel for it. Not only does it have a turbo component that lets it ramp up in speed rather quickly – it also is the smoothest ride around. When you hit 65, you think you’re going 30 because the car is designed so well.

The Cruise Control is also a plus in this case, because it prevents you from going past the speed limit since your sense of speed is severely warped by the car’s super quiet functionality.

Gas mileage, as I mentioned above is also incredible. It has an “Eco” button that when pressed (actually it seems like it goes on automatically) conserves gas. And to get by with a full tank a gas, for one week and almost 400 miles before gassing up is a boon as gas prices continually rise. It’s about time smart gas mileage was built into cars that weren’t hybrids or solely electric. 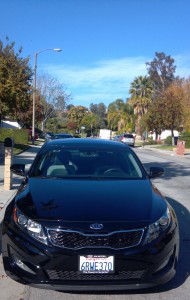 The trunk is quite roomy, and surprisingly, at the push of the button, the backseats can be pushed forward and flat so you can place bigger items in the vehicle – it’s all the benefits of an SUV, without the ugly eye sore look of those vehicles.

There are a couple of minor criticisms. Placing a child car seat in the center of the back seat proved to be a little too difficult – but on the left and right sides, it fit perfectly.

I’m not the tallest person in the world, but at times, I felt the headroom was a bit deficient (even after lowering the seat). I also like having a place to rest my left arm when driving, and the armrest was a bit lower to my liking (more personal nitpicky stuff than anything).

One of the most surprising aspects of having the car for the week, was how many people were excited that we had bought a “new car” and wanted to know how the Optima was to drive, because they were considering purchasing it. Of course, it was very easy to praise the vehicle – and to also quietly explain, it was a loaner.

The KIA Optima is one of the most impressive new cars I’ve seen. For $25,995.00 suggested sticker price, this is a great bargain for such a classy and fuel-efficient vehicle. It was a sad day when the vehicle left, because we had gotten used to the smooth ride and the gas economy.

With so many gadgets and bonuses on this vehicle, we didn’t even scratch the surface of all the various things the car is capable of. Yet when it comes to getting a new car, you definitely want the best – and something that advances you into the future. The KIA Optima does just that. You don’t have to be a superhero to have a super car like the Optima, but it sure does make you feel like one.