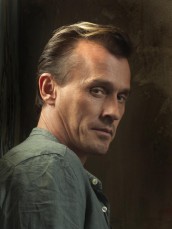 One of the most exciting bits of news coming out of the Winter TCA Press tour today – Robert Knepper’s T-Bag character from PRISON BREAK will appear on A&E’s new series BREAKOUT KINGS from the producers and creator of PRISON BREAK.

How cool is that?

The new series features a crack team of U.S. Marshals using expert “breakout” criminals to help them capture other prisoners on the run. That’s where T-Bag figures in.

“The character T-Bag breaks out of Fox River prison and our guys chase him,” confirms executive producer Nick Santora, but says don’t expect to see a PRISON BREAK of the week cameo. “Never say never, [because] we also don’t want people to think it’s a reunion show and we’re constantly bringing people back from PRISON BREAK. And of all the people from PRISON BREAK. How can you top T-Bag?”

What appealed to PRISON BREAK creator Matt Olmstead (and executive producer/creator of BREAKOUT KINGS) about returning to the world of prison breakouts was the chance to do something more close-ended, as opposed to a serialized arc.

“For us, what was attractive, was not only the momentum of having a fugitive on the run, but  also the thematic that unlocked the show for us when we first started talking about it which was ‘everyone is running from something.’ We then went in and made sure the character they were running from and towards. That was for us what was the most rewarding part of it.”