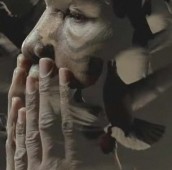 For TAKING ON TYSON, the six-part docu-series follows the boxing legend’s love of pigeons

Not sure what to make of this panel today at the Winter TCA Press Tour in Pasadena, CA, but boxing legend Mike Tyson is now pigeon racing.

For TAKING ON TYSON, Animal Planet will be presenting a six-part docudrama about his love of pigeons and his fascination with pigeon racing. The show airs in March.

Tyson was very vibrant in talking about pigeons and says he’s not looking to change people’s image about pigeons.

“Normally, people have an image in their mind, they want to keep that image,” says Tyson. “It will be hard for me to change their opinion.”

He does observe and note, “pigeons were man’s first feathered friend.”

While the panel for this show is hands down one of the most surreal experiences at TCA’s so far, but yes, this show is  real, it’s not a parody and Tyson takes his pigeons 100% serious.