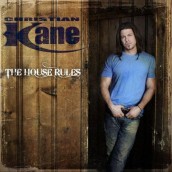 Although THE HOUSE RULES is his first major label release, Christian Kane has been around a good while now as a singer/songwriter. Those familiar with his music via live performance and/or independently-produced earlier records can testify that he is consistently passionate, entertaining and smooth on the ears. Good news: THE HOUSE RULES adds big-league production value to the tracks without in any way diluting Kane’s essential sound or sense of fun. Produced by Bob Ezrin and Jimmie Lee Sloas, both of whom do double-duty as musicians on the album, THE HOUSE RULES dynamically embraces Kane’s signature mixture of rock and country.

The title track by Kane and Blair Daly, which opens the album, is what might be called a militant good time anthem. Indeed, as the lyrics state, “A good time is mandatory!” A solo harmonica blast (from Kirk “Jelly Roll” Johnson) gets our attention at the start, before the music kicks in with slamming drum and electric guitar that turn into an insinuating melody carried by Kane above an almost menacing bass line, as we’re invited to a place where everybody “sings and drinks and laughs and gets high.” There are different rules for genders: “Rule Number Seven is don’t touch the women, but they can grab whatever they want to.” The energy and the sentiment are infectious, with chanting backup vocals and Kane’s lead promising us a wicked blast.

The next song, “Something’s Gotta Give” by Kane, Aris Albritton and Brandon Kinney, wouldn’t be welcome at the party of the preceding “House Rules.” Kane sings ruefully of missed chances and a life spent on the shelf, with a strong suspicion that our narrator has hit a dead end, even though he still plans to “hit the ground running/At least that’s what I keep telling myself.” Strong electric guitar and rhythmic percussion dominate the verse, before the music swells in a mournful country swirl on the chorus, with Kane’s emotion adding a ray of hope to the grim scenario.

“Thinking of You” by Kane and Daly was featured on an episode of LEVERAGE last year, performed on camera by Kane, as well as Alona Tal and John Schneider. It’s a romantic ballad that begins softly with the ironic observation, “They say that all good things/Must come to some kind of ending/We were so damn good, I guess we never stood a chance.” Kane puts palpable longing into the vocals in this ode to a relationship lost to wanderlust and ambition, with soundtrack-ready orchestration.

“Whiskey in Mind” by Kane, Daly and Danny Orton changes the mood to one of crazy delight, with a wocka-wocka sound that wouldn’t be out of place on a Danny Elfman Oingo Boingo song. The track written by Kane, Daly and Danny Orton tells of a man who’s totally thrilled to be picked up by a strange woman in a bar. In its way, “Whiskey” is almost as catchy as “House Rules,” with rhythm that at minimum invites dancing in one’s seat and really calls for singing along.

“Let’s Take a Drive” by Kane, Sloas and Phil Madeira is a song of sweet comfort to a longtime woman friend who has just been ditched by her spouse. The song starts with a finger-picked acoustic guitar, played by Kane before the tune expands to include bass, percussion and electric guitar, then returning to acoustic in its softer moments. The lyrics offer to help the woman to find the daredevil she used to be: “You rat-tat-tatted on the glass/And screamed on high/I’m alive …” The music and Kane’s voice take an unexpected, thoughtful turn on those last two words, adding depth to an already touching picture.

Jason Roller’s fiddle makes an especially potent contribution to “Callin’ All Country Women” by Kane, Sloas and Jerrod Niemann. This is an ode to “Daisy Duking, Dixie Chickin’ pigtail-wearing girls,” sung with a sense of urgency. There’s an agreeable mix of rhythm between the wry verse and the commanding chorus.

“American Made” by Kane, Wayd Battle and Steve Carlson is almost a rebuttal to the previous track, praising females from almost every state in the union (think the Beach Boys’ “California Girls”) before zeroing in on “My girl, she’s American-made.” This is a case of joyous, lusty admiration for all things U.S. women have to offer.

“Let Me Go” by Casey Beathard and Tom Shapiro is the first cover on the album. Playing on the several ways the title phrase can be used, it tells of a man trying to persuade a woman to “let me go” because he’s no good for her, while she wants him to “let me go” with him, because she’s so good for him. Kane plays both parts of the equation, low and troubled as the man and finding a comfortable higher register without rising into falsetto as the woman admonishes her beloved, “Nice try … I don’t think you’re all that tough.”

“Seven Days” by Kane and Carlson is a hard-driving, desperate and very catchy number about gambling, with a man who’s got nothing left to lose after his woman’s been gone for a week. Roller contributes a fierce fiddle to a tune that recalls “Life in the Fast Lane,” without resembling it. “Yes, ma’am, I’ll have another round,” our narrator sings in the midst of his drive to put down the last of his money on a bet.

“Making Circles” by Whitney Duncan and Jonathan Singleton tells of lovers who can’t get along but can’t quit each other to a waltz tempo. Kane conveys love and exasperation in his vocals as he sings, “We both need to lead/As we dance alone,” ending on an a cappella sigh. Former FLEETWOOD MAC singer (’90s era) Bekka Bramlett adds supporting vocals that give the rueful emotions even more texture in a succinct portrait of a certain type of relationship.

The album concludes with a startling, affecting cover of Tracy Chapman’s “Fast Car.” Kane remains largely true to Chapman’s original folky instrumentation, though the production values have been amped up a bit to fit the rest of the album. What makes this “Fast Car” notable is that changing the gender of the song’s singer/narrator brings out a different story in the lyrics, forcing the listener to examine previously unconsidered assumptions. When Chapman sang of quitting school to take care of her father and expecting that she and the lover she’s singing to will “both get jobs,” it sounded like normal, working-class teen expectations. When Kane sings it, it sounds at once like he’s hopeful that his love will share his ambitions. When Chapman sang that she works “at the market as a checkout girl,” it’s bad enough; when Kane sings about being “a checkout boy,” the humiliation is palpable. The soaring longing in the chorus is as potent as ever.

Kane’s voice is the strong, melodic through-line here, binding together the playful, the serious and the bounce-off-the-ceiling raucous, but there is also an overall sensibility at work. All the songs in THE HOUSE RULES feel as though they belong in the same universe, though they are varied enough to prevent any sense of repetition. All the numbers are keepers, and several, including “The House Rules,” are standouts. With THE HOUSE RULES, Kane moves from being the guy that the cool kids know about to the performer who makes everyone want to, like the song says, sing and drink and laugh and get high.