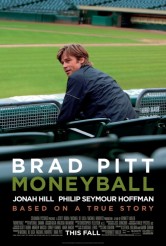 An oddly wonderful movie about baseball, statistics and original thinking

To describe MONEYBALL accurately is to run the risk of making it sound like a number of things that it is not – dry, insular, too cerebral for the masses. Instead, it is about baseball in the way that THE SOCIAL NETWORK was about Facebook. Baseball is MONEYBALL’s universe, but the film actually makes the topic so universal that even people who don’t know a home run from a strike out can enjoy it.

MONEYBALL, based on the book by Michael Lewis, examines a year in the life of the Oakland A’s team through the perspective of that organization’s general manager and former ball player Billy Beane (a real-life person played here by Brad Pitt). It’s 2002, and Billy has just seen his team once again shut out of the World Series by a bigger and better-funded outfit. Worse, the Oakland A’s then get raided of their top players by teams that can afford much fatter paychecks, and the managers of the other teams simply refuse to trade any of their talent. Without a bigger budget, how can the Oakland A’s ever effectively compete? In MONEYBALL, Billy finds an answer in the unlikely person of Peter Brand (Jonah Hill), an unassuming young Yale-trained economist who clearly has never played baseball. Peter, however, not only has a passion for the sport but he has some fascinating theories – if one redefines what constitutes “talent” and “potential,” there are suddenly any number of great undiscovered players out there just waiting to be signed by the Oakland A’s.

It’s rare for a film to successfully and unpretentiously dramatize something as abstract as changing a way of thinking, but MONEYBALL puts it in terms that are both visually immediate (you can’t argue with baseball as something that instantly demonstrates the subject in question) and easy to grasp. Thanks to a very smart, snappy script by Steven Zaillian and the ever-articulate Aaron Sorkin, from a story by Stan Chervin, it’s also highly entertaining and flows easily. We may not share Billy’s preoccupation with proving the particular points that he feels he needs to show the world, but we can see (without having the issue belabored) how he is using baseball as a means of measuring his own worth.

Director Bennett Miller sets up a good, consistent flow, so that one scene feels like it leads logically into the next, even when the movie detours into Billy’s personal life, consisting of shared custody of bright daughter Casey (Kerris Dorsey) with ex-wife Sharon (Robin Wright). These scenes provide a little extra heart and perspective without overdoing it.

The role of Billy gives Pitt the opportunity to not only play a man grappling with huge issues while immersed in crises around him – he’s done this before – but also to actually be amusing instead of roiling in angst. The lightness suits him and his performance is very deft and thoughtful. Hill is profoundly sympathetic with magnificent timing as a man who is astonished to find someone is actually listening to him. The supporting cast is full of great actors like Wright, Philip Seymour Hoffman (as the Oakland A’s field manager, who thinks Billy has gone far off track), Nick Searcy, Arliss Howard and Reed Diamond, to name a few.

MONEYBALL is definitely a movie for people who love baseball, but it’s also for anyone who is interested in how human beings perceive one another, and how those perceptions can be changed. It’s also for anybody who just likes good, intelligent filmmaking.