SCREAM, DON'T BE AFRAID OF THE DARK and HOUSE OF 1000 corpses are honored

Corey Feldman hosted the event with a CHILDREN OF THE CORN-esque stage backdrop providing fodder as a scarecrow proved to be Feldman’s comedic foil throughout the night.

David Arquette won for his role in the SCREAM movie franchise. After accepting the award from his friend Thomas Jane, Arquette said, “I love the support of horror fans and the things they love. They’re a bunch of goofballs, just like me.”

Bailee Madison, the young star of DON’T BE AFRAID OF THE DARK also won and had the distinction of being the youngest EyeGore winner.

Rainn Wilson of THE OFFICE received an award for his work in HOUSE OF 1000 CORPSES written and directed by Rob Zombie. Zombie presented him the award. Wilson was very honored and called his fellow CORPSES actors as the “second greatest ensemble” he’s work with.

Jamie Kennedy also received an award for his work on the SCREAM franchise noting “a lot of people were upset I died in SCREAM 2.” He also said this award was a great honor, noting “horror fans are the best and I can always go down to San Diego and sell 8 x 10’s if I get nothing else.”

For the newcomer award, Emma Bell of FINAL DESTINATION 5, THE WALKING DEAD and FROZEN was grateful for her award as well thanking the horror “community” for the support.

Alice Cooper also received an award, but was unable to accept due to being on tour (his daughter Calico Cooper accepted in his place). And the annual EyeGore best short contest award went to Brent Bokovoy for “Monster in the Swimming Pool.

After the ceremony, the press was able to check out the new mazes at Halloween Horror Nights.

There were six mazes in total – mostly inspired by movies. 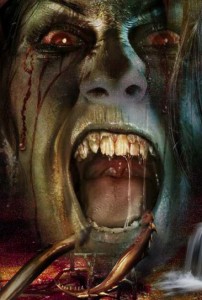 Surprisingly, LA LLORNA: VILLA DE ALMAS PERDIDAS (THE WEEPING WOMAN: VILLAGE OF LOST SOULS) and imagined by Diego Luna was the best of the bunch. It was truly terrifying featuring some of the most disturbing and creepy imagery of all the mazes.

I found the ALICE COOPER: WELCOME TO MY NIGHTMARE (inspired by his groundbreaking 1970s album) to be quiet cool too. It was very different and was enhanced by music from the album playing throughout.

THE THING: ASSIMILATION was good, not great. Being a big fan of the 1982 John Carpenter original, and looking forward to the new prequel, this maze could have been more atmospheric and instead relied on hybrid monsters roaming the maze. It was nice to see THE THING gets some much needed attention, but there was so much more that could have been done.

With SAW no longer cranking out movies, replacing it this year was Eli Roth’s HOSTEL maze which used the same stage and some of the same props that SAW had used in the past. This was more on the gore and unsettling side of things. Just like the SAW maze, not really effective, but it definitely will satisfy the gore hounds.

Making a reprise from last year is Rob Zombie’s HOUSE OF 1000 CORPSES maze – and in 3D. The 3D elements are pretty cool and the flavor of that cult hit came through. The irony, of course, is that Universal Pictures refused to release Zombie’s movies years ago, allowing Lionsgate to distribute it, and now they’ve featured a maze based on the movie two years in a row. The irony indeed. 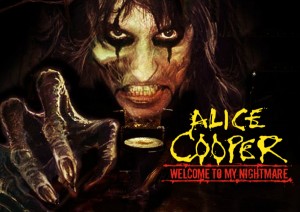 THE WOLFMAN: THE CURSE OF TALBOT HALL brings the 2010 THE WOLFMAN remake as its starting off point and it has the production design already in place (that is used year after year) to really give it a nice, expansive feel. In some ways, more of these mazes could use a little more open space to bring more chills and thrills.

And finally, the TERROR TRAM: SCREAM 4 YOUR LIFE ride is definitely one of the highlights. Using the Tram as a starting off point, the maze ends up in everyone exiting the tram and walking through the backlot through all sorts of scary scenarios. The set up is also quite good, in that we’re made aware that several new “horror movies” are filming on the backlot, which gives the opportunity for different kinds of horror scares other than Ghostface running around.

For more details, click on the link – UNIVERSAL’S HALLOWEEN HORROR NIGHTS (the event runs through October 31).

It’s nice that Universal continues to honor horror icons and continually finds new and inventive ways to recreate theme park scares by honoring horror films. Each year they seem to top themselves, and this year was no different.