The actor also talks about his time on CHUCK 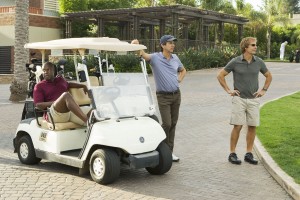 Andre Braugher, Ray Romano and Scott Bakula in MEN OF A CERTAIN AGE - Season 2 - "Let the Sunshine In" | ©2011 TNT/Michael Desmond

In addition to having a strong stage career, Bakula is something of a science-fiction/horror icon, given his years on QUANTUM LEAP and STAR TREK: ENTERPRISE, his lead role in Clive Barker’s film LORD OF ILLUSIONS and his recurring guest role as the title character’s scientific genius dad on CHUCK. Bakula graciously discusses all of this with Assignment X.

ASSIGNMENT X: Were you sorry your character Steven J. Bartowski was killed off on CHUCK?

SCOTT BAKULA: Well, it happens. I was sorry, but I had a great time on that show, great bunch of people, creatively so smart and Zach [Levi, who plays Chuck] is just a blast and the cast is great.

AX: Is Terry on MEN OF A CERTAIN AGE the most down-to-earth person you’ve played on a regular basis?

BAKULA: He’s not quite as down to earth because he’s an actor, so he’s still got a little bit of that heightened – he’s allowed to get away with a little theatrical behavior, so to speak. But yeah. Certainly, when you look at most of my work on television, it’s been pretty heightened, but the character I played in THE INFORMANT was pretty down to earth and very low-key and very mild, but I like playing somebody like this, it’s really great. I did a play a couple of years ago called QUALITY OF LIFE that Jane Anderson wrote, and it was a very, very down, low-key kind of a guy.

AX: You’re a successful actor playing Terry, an actor who isn’t very successful. Do you feel his motives for wanting to act are different enough from yours that you don’t identify with him, or do you feel sort of horrified empathy?

BAKULA: Horrified empathy. It’s so much fun to get to play an actor, and certainly I can relate to times in my life when acting wasn’t going so well for me, and I have many friends who are this age who are still trying to act and make a go of it, and they are doing other things also. So I loved this character from the get-go, from the first reading that I [did] when I first got the script. It jumped off the page, and I’m lucky enough to get to play him. 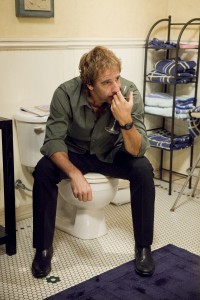 AX: Does Terry have moments that remind you of your own experiences as an actor?

BAKULA: There are many things. I mean, I made commercials [like Terry does] when I was starting out in New York. So there are connections, but they’re not right-on. [The writers] are not coming to me and saying, “Tell us about when you were struggling and you were bartending in New York City.” But [Terry’s scenes] are close enough and they’re real enough that they all kind of resonate with me. Again, I have to say what resonates with me more than anything is the fact that we all know actors and actresses who haven’t ever quite made it, but are still hanging on. I guess it’s true in any profession, but in ours particularly.

AX: Do you prefer the more naturalistic material, or do you like it when there’s a little sci-fi tweak in the reality of what you’re playing?

BAKULA: Well, I can’t lie. I’ve done so much science-fiction stuff, I like that tweak in reality. I like both, you know. I really do. I think in a funny way, to make the sci-fi work is a little harder sometimes, because you have to get people to believe whatever that new reality is [laughs], that altered reality you’re creating.

AX: When you’re in a series like MEN OF A CERTAIN AGE, do you like having sets where everything’s really physically there and you don’t have to tell yourself, “I’m pretending that tennis ball is a hovering alien”?

BAKULA: Yes. I don’t miss the green-screen at all.