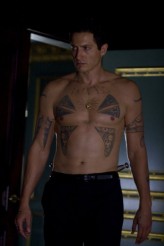 The storyline is blowing up – literally – on Syfy’s CAPRICA, the prequel series to the network’s acclaimed remake of BATTLESTAR GALACTICA.

There are monotheistic terrorists from Gemenon running amok, the persona of one dead girl wandering through cyberspace as an immortal, another girl in the giant body of a prototype Cylon – and then there are the Adama brothers, Joseph, played by Esai Morales, a very conflicted lawyer (and father of young William, who will grow up to be played by Edward James Olmos on BSG), and his brother Sam, played by Sasha Roiz, who is a professional mobster.

With the show not renewed for a second season, Syfy will be airing a marathon tonight of the remaining, unaired episodes.

Roiz, a Montreal native who has done a lot of series acting in his native Canada and had roles in the feature films THE DAY AFTER TOMORROW, LAND OF THE DEAD and 16 BLOCKS, among others, took time to talk about playing CAPRICA’s resident straight-faced gay badass. [Editor’s Note: The interview took place before CAPRICA was given its cancellation notice]. 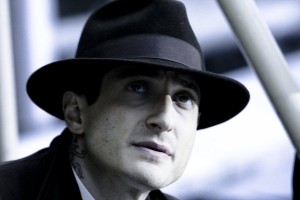 ASSIGNMENT X: Were you familiar with BATTLESTAR GALACTICA before you became involved with CAPRICA?

SASHA ROIZ: I was familiar with it and I had friends who were working on it and I’m very proud to be part of the extension of that.

AX: Can you talk about your character, Sam Adama and him being part of the Tauron mafia …

ROIZ: [The Tauron mafia is] called the Halatha. It’s very much a cultural mob and I play an enforcer for that organization and it’s a wonderful world that we’re exploring. It’s elements of THE GODFATHER and THE SOPRANOS and all those things that we love.

AX: How does Joe feel about his brother Sam’s involvement with the Halatha?

ROIZ: You know what? Joe has many complexities about my allegiance and his own allegiance to the organization and to his people, so it’s actually quite interesting to watch us butt heads over the issue.

AX: Did you and Esai Morales, who plays Joe, discuss your characters’ fraternal relationship?

ROIZ: Yeah, we spent some time together here in L.A., we bonded very quickly, he’s a very easy guy to get along with, me not so much, but him yes, and he and I spent a lot of time together, and I think at first we were a little kind of shocked by the casting, because I think I’m a little taller than him, but I think when you see us on screen, I don’t think you have any doubt that we have brotherly love there.

AX: CAPRICA is filmed in Vancouver. Had you worked there before?

ROIZ: Working in Vancouver is new for me. I’m Canadian – I live in L.A., but I grew up in Montreal, so it’s nice to be back in Canada for a time and it’s fantastic to be in Vancouver. It’s a beautiful city.

ROIZ: There’s a tremendous work ethic on this set, because we have the same crew as BSG, so these people have labored and devoted themselves to BATTLESTAR for five, six years and now are just as devoted to our program. So there’s a fantastic investment by everybody.

AX: How do you feel that Sam views himself?

ROIZ: I don’t think Sam spends very much time dwelling on himself. I think he’s a man of action and as you’ll see in the show, he’s someone who acts very quickly and very intuitively. He doesn’t spend a lot of time pondering and dwelling on things. That’s actually Joseph’s department. Joseph sits and broods and ponders things over and over, where Sam always tries to incite him to action.

AX: Is Sam a polytheist or a monotheist? 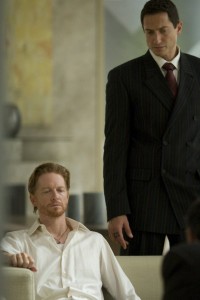 AX: So in the CAPRICA universe, he’s a conventional guy.

ROIZ: Very conventional. When we see the Taurons, their culture, their aesthetic, it’s so much fun to bring to life, you see people who very much mimic the wave of immigrants [to the United States] a hundred years ago. And very much part of an Old World culture. So he’s very much polytheistic. Sam is [also] gay. That’s a really fascinating [aspect of] the character. As tough and menacing as he is, he’s a gay character and you see a homosexual character being portrayed in a very untraditional way, very refreshingly. Sam is married. He’s in a monogamous relationship. Ironically, when you watch, you realize he’s in one of the only stable relationships in the show. As every other relationship crumbles around him, he’s pretty steadfast in his.

AX: Although Sam has moved from Tauron to Caprica, he doesn’t seem very interested in becoming assimilated into Caprican culture …

ROIZ: That’s the thing about Sam – he has no interest in anything but Tauron. He takes great offense at Capricans, with Capricans, and that’s where Joseph and he really butt heads, because Joseph has tried to lead a very Caprican existence, educated himself, changed his name, assimilated, but I think he realizes that no matter how hard he tries, he’s forever Tauron.

AX: Does Sam have a sense of humor?

ROIZ: There are some elements of humor, but I think the humor with Sam is more in the sense – he will say funny things, but it’s more circumstantial. He’s a humorless character when you watch him from a distance, because his absolute conviction and zealousness about things sometimes come across as humorless. He’s just a bull. The Tauron symbol is the bull, and that’s who he is. He’s a stubborn, bull-headed individual who just will not waver at all in his opinions. He’s quite funny to watch at times.

ROIZ: I personally don’t even see the sci-fi as I’m working and reading these scripts. I just try to treat it as a drama. When I watch it, it’s really clear that there’s a sci-fi component, but in the making of it, you’re just invested in these characters and the moral complexities that they face and the relationships that they’re involved in and that’s the only thing really that sort of propels us. It makes for some fantastic scenes.