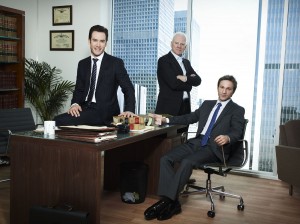 ASSIGNMENT X: What was the genesis of the show?

KEVIN FALLS: Well, our partner on this – co-creator Bill Chais – actually came up with the idea. He’s a former lawyer and he plays the guitar and he’s kind of crazy. He said, “I’ve got two guys taking a white-shoe offer.”

JAMIE TARSES: Am I wrong to say that you sat down for lunch with [Turner development executive] Lillah McCarthy and had a conversation about doing a legal show for Turner?

FALLS: Jamie is being very kind. What happened was, I said, “I don’t like the idea,” and Jamie was in the room, and Jamie goes, “I like it,” and I said, “I like it, too” [laughs]. And then I happened to see Lillah at lunch, and she said, “What’ve you got going on?” and I pitched all my ideas, and [she responded to] nothing, and I said, “Well, what about these two lawyers?” And she said, “That’s perfect, that’s exactly what we’re looking for.”

AX: Were the roles tailored to the actors who play them or were the characters pretty set and then you cast to what was in the script?

FALLS: We always had Michael Cera and Jonah Hill in our minds, but they were a lot younger [than the scripted characters]. It was a whole different take. They’re great – these two guys that we got [Gosselaar and Meyer], we really lucked out.

TARSES: I think we cast Mark-Paul, and then we were looking for our Franklin, and the truth is, we found a couple of people to read, and from the moment Mark-Paul and Breckin got up on the stage to test, when they were just talking to each other, there was an instant chemistry, just like these guys have been best friends from forever. It did feel like it was the truth. The fit of the show was being perfected, and the two of them were just onstage waiting to start reading the roles.

AX: And Malcolm McDowell’s character Stanton Infeld is presumably happy being himself.

FALLS: He is. He’s very happy with himself, as you will see. It’s a very eccentric, original character. It’s fun to watch him.

AX: Did you cast Malcolm McDowell as the head of Infeld Daniels because you needed somebody who could hint at being menacing without being overtly menacing?

FALLS: Likable but has to have a gravitas being the boss, somebody they can bump up against.

AX: Well, Malcolm McDowell can be incredibly charming, and yet the back of your mind is always going, “Remember A CLOCKWORK ORANGE …”

FALLS: Yeah, I think there’s a little bit of that.

TARSES: And I think these guys have done a good job of keeping that slightly dangerous side of Malcolm there – far in the background, but there nevertheless.

AX: How many female regulars do you have? There’s Garcelle Beauvais …

TARSES: Dana Davis is a regular. And then we have a couple of recurring women.

FALLS: Alexandra Holden is in a number of episodes, but is not a series regular.

AX: Did anyone have any feelings good or bad that you wound up with a bunch of white men and two African-American women as regulars?

TARSES: No. We also have an Indian man [Kumail Nanjani, who plays researcher Pindar Singh] who is a series regular. Our objective was to have as much diversity in this cast as you can, and so we certainly had an eye towards that, but these were the women who were best for these roles. It worked out that way and they’ve done a great job in the roles.

AX: Some of the preview material shows one of the main characters getting into quite a lot of trouble at some point …

FALLS: Yes, at the end of the season.

AX: Is the show arced? Is that trouble going to come out of something that’s brewing throughout the first season?

FALLS: Not really. The idea is that we want to have something kind of weighted toward the end that makes you want to come back and see what’s going to happen [next season]. Turner was not very invasive in how we do things, which is great, but they do want these to be standalone episodes so you can enjoy them if you missed the first two.

AX: Is there any through-line in the show, or are the episodes completely standalone?

FALLS: I would say there are threads.

TARSES: There are ongoing bigger arcs, but every episode has a very clear, strong beginning, middle and end. You can come in and watch episode six and not feel disoriented if you haven’t seen the prior episode.

FALLS: It’s not that serialized.

AX: How many episodes are in your first season?

TARSES: There are nine, plus the pilot. Ten episodes.

AX: Would you say FRANKLIN & BASH is like last season’s CBS lawyer dramedy THE DEFENDERS at all?

FALLS: I watched a little bit of the end of it and it feels much more like a CBS legal franchise. We go home with our characters and we sometimes only have two legal stories, and we just get into a personal story, so it’s not anything like it. Our show is a lot more fun, I think. They were probably a little more serious.

AX: Can you talk a little bit about your creative staff? What were you looking for when you assembled your writing team?

FALLS: We always like to have a lawyer. Co creator Bill Chais is a lawyer, and we like to have somebody that’s had some drama experience, but we also have a lot of comedy, so we got some comedy writers. We don’t have a huge staff. That’s just the way television is right now. We look for strong writers – we also look for chemistry. If you’re in a submarine with a staff for months at a time, everyone has to get along. We have a couple of smart women, which we need.

AX: What else should we know about FRANKLIN & BASH?

TARSES: I think everyone should watch it on television.

TARSES: It’s a nice place to be. I think that if you go through what do you want a television show to provide for the audience, it’s a place they want to sit back on a couch and turn it on and spend some time there, and I feel like these guys have done a really good job of creating that environment with this show.

FALLS: Yeah. And those two guys, Mark-Paul and Breckin, those two characters – they’re having fun with what they’re doing and it comes across.