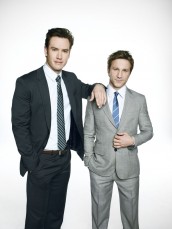 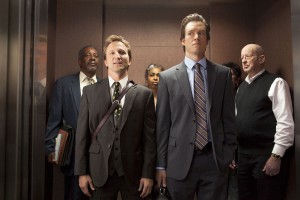 TNT’s new hour-long legal comedy/drama FRANKLIN & BASH, which premieres tomorrow at 9 PM, is named for its two attorney protagonists. Jared Franklin, played by Breckin Meyer, is so free-wheeling that he can, and will, get a witness to strip on the stand for effect. Peter Bash, played by Mark-Paul Gosselaar, is a bit more strait-laced and shrewd, knowing how to capitalize on his partner’s actions. In the pilot, the two lawyers are recruited by Malcolm McDowell’s Stanton Infeld to bring their unconventional talents to his heavy-hitting L.A. law firm Infeld Daniels.

Gosselaar, known for NYPD BLUE, wrapped up a two-year run last season as a public defender on TNT’s RAISING THE BAR, though he says he feels the tone is different enough on FRANKLIN & BASH to avoid comparisons. Meyer, who like Gosselaar has been acting from a young age, played Matthew McConaughey’s brother in GHOSTS OF GIRLFRIENDS PAST and the straight man to GARFIELD. Meyer has done half-hour comedies (he was a regular on MARRIED TO THE KELLYS, INSIDE SCHWARTZ and others) hasn’t done a drama series before.

The two actors play off each other in this exclusive interview with ASSIGNMENT X with the same friendly camaraderie they have on their series and are utterly cordial, even though Gosselaar is battling a fever.

ASSIGNMENT X: Were you looking to do another television series?

MARK-PAUL GOSSELAAR: No. I think things fell into line with a good script, that’s how it starts, that creates some interest, and then when they said they’d like to bring someone on like a Breckin Meyer to be a partner [to Gosselaar’s character], that was very interesting to me, and then we went out to him and got him on board and knowing the history behind [producers] Bill Chais and Kevin Falls and Jason Ensler, the director, things fall into place and it’s those elements that draw you into a project.

GOSSELAAR: And then you just throw caution to the wind and make a good project.

MEYER: What he said [laughs]. I wanted to do a show, but I didn’t want to do a sitcom, I didn’t want to do a half-hour show. I’ve never done an hour-long, and the one thing I like that TV affords is the ability to build a character over time and not just do a six-week movie or a three-month movie. I wanted to show, but my favorite stuff tends to be ensemble stuff. This is obviously [primarily] a two-hander, but it is a real ensemble with a great cast.

AX: How do you feel about being thrown so intensely opposite one other actor, because on the show, you are a double act?

MEYER: The casting was real important to make sure there was chemistry. Mark-Paul already had the gig when I read the script and when I met, I sat down with [producers] Kevin and Bill and Jamie [Tarses] and Jason and they mentioned Mark-Paul, who I’d met once, and we got along, but I think you get lucky. I mean, you hope to get lightning in a bottle, where two actors really respond and really play off each other well, and confidently, I can say we do.

GOSSELAAR: Yeah, I agree. You can put people together, but then there’s a bit of luck involved, and we got lucky.

GOSSELAAR: Yeah. We work great off of each other, because in life, he is a bit more off the cuff, and I’m a bit more – centered and cranky are the same thing [laughs]. But no, it’s easy for us to play those characters. He’s a funny guy, Mr. Meyer.

MEYER: I think the one good thing about our characters, and the characters are established from the get-go, is that other than working for their clients, they can do no wrong. They don’t follow rules. So it gives us a wide-open place to play.

AX: Do you have to deal with a lot of legal huffle-fuffle jargon in the dialogue?

GOSSELAAR: Not as much as on most legal dramas. I’d say a good percentage of the show takes place in a courtroom, but it’s more about the chemistry, the relationship between these two, that I think is the most important element of the show.

GOSSELAAR: The writers/producers are very smart on this show, because you have to stay true to a legal drama in a way. I mean, it is a legal show, and fans of legal dramas [have certain parameters0.

MEYER: Yeah, [it has to be done] without boring people. But our cases that we have are very smart, very interesting. There’s an element of comedic value, which is something we haven’t seen since BOSTON LEGAL or ALLY McBEAL. So it’s refreshing. It’s not your typical procedural legal courtroom drama.

GOSSELAAR: I think we’re both at a point in our careers where it’s nice to be working with people that you want to work with. We’ve been in this industry so long that one of the main concerns for me is showing up to work and wanting to be there with people who think the same way that I do. So to be part of the family that we have on FRANKLIN & BASH who are like-minded, it’s refreshing.

MEYER: I completely agree with Mark-Paul.

GOSSELAAR: Of course you do.

MEYER: He pays me to.