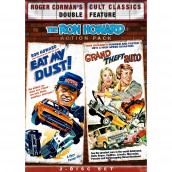 Car culture certainly was a major part of the 1970s, both on screen and off. This resulted in a slew of car-driven (pun-intended releases) that ranged from comedic, dramatic, action-packed and even horrific (THE CAR anyone?)

Oddly enough, Ron Howard was the poster child for many of these films, having starred in three of them in the 1970s. First was 1971’s AMERICAN GRAFFITI (albeit it was set in the car culture of the 1950s), followed by his two car crash comedies for producer Roger Corman (EAT MY DUST and GRAND THEFT AUTO).

Enormously successful, both EAT MY DUST and GRAND THEFT AUTO (now bundled together as THE RON HOWARD ACTION PACK) were cheapie little thrill rides that bested the studios at their own games (of course, this was something Corman knew how to do well).

1976’s EAT MY DUST is the better of the two films, directed by Charles B. Griffith. It stars all-American Ron Howard as a rebellious kid who Hoover Niebold who steals a racecar to impress the young, hot Darlene (Christopher Norris).

Form there, they go on a wild adventure in the car with their friends, by themselves and with random people they pick up along the way. The movie is fast and furious and incredibly silly. Hoover’s dad is the Sheriff and he sends his patrol cars to go after his son, and his son always comes up victorious.  There’s also a strange underlying thing where he doesn’t want to fully arrest his son – he just wants the car back.

There are also numerous ingenious site gags revolving around the cars and it’s all held together by the fun performance by Howard.

GRAND THEFT AUTO followed a year later in 1977. Although it’s referred to as a sequel, it’s a sequel in the car elements only and with Howard’s starring role and nothing more. Howard was a pretty smart guy, knowing he wanted to move into directing, he made Corman the offer that he would star in AUTO for the same price as EAT MY DUST, but he’d also write and direct the film for free.

As a first effort, Howard has ample control of the film, but some of the fun or EAT MY DUST is sorely missing. And because he was starring, the film is constructed to make it appear he’s the star of the film (even though he’s only in it sporadically), while other characters do more of the heavy lifting including his fellow HAPPY DAYS star Marion Ross in a very funny role (and completely different from her HAPPY DAYS persona of Mrs. C).

The story this time follows Howard as good-natured Sam who runs away with his love Paula (Nancy Morgan) in her father’s Rolls Royce. She wants to marry Sam, not the arranged marriage engineered by her rich politico dad. This results in everyone chasing down the couple.

Mind you, GRAND THEFT AUTO is fun, but the crackerjack precision of Howard’s later directorial precision was just in the infancy stages. It does show he has enormous potential, and of course the move to direct this led to the much bigger budgeted NIGHT SHIFT and from there, the rest is history.

The special features on this Roger Corman double feature include brand new widescreen transfers (they look great) and brand new interviews with Ron Howard. The fact that Howard looks back so fondly on this film and appreciates the opportunity that Corman gave him is really nice to see. Most of the time, when directors or stars get big, they forget where they from. Not so here.

Both discs are packaged with new and archival supplementary material including commentary from Howard and Corman on GRAND THEFT AUTO. Leonard Maltin interviews Corman in a couple featurettes, and it’s great to see the clever tricks the editor used in making EAT MY DUST work with its limited footage.

I also loved the special feature on poster artist John Solie who was responsible for many of Corman’s classic 1970s and 1980s artwork. Photoshop has taken over the poster world nowadays, so this almost lost art of painting a movie posters is fascinating to revisit.

One of the more interesting things that comes out of the special features is the varying years in between interviews from Corman and Howard and how the memories of Howard agreeing to do GRAND THEFT AUTO varies as the years move on.

EAT MY DUST and GRAND THEFT AUTO are fun relics of an era where stealing cars was actually a fun thing to do (with few consequences). They’re both big on ambitions, a bit ridiculous and preposterous, but that’s part of their innocent charm. They’re worth checking out to relive a time and place that probably never actually existed, but only existed in the hyper-real world of low budget moviemaking.