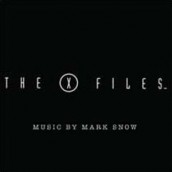 The term “whistling in the dark” took on a whole new meaning when Mark Snow’s cheerfully sinister main title theme first announced agents Mulder and Scully on the Fox channel in 1993. With its telltale vocalizations abetted by undulating, eerie percussion, Snow’s Emmy-nominated main title joined STAR TREK, LOST IN SPACE and THE BRADY BUNCH as one of the most instantly identifiable themes in television history.

As the FILES’ premise upped the supernatural disbeliever premise of THE NIGHT STALKER (not to mention PROJECT U.F.O) by several, terrifying notches, Snow’s doom-ridden atmospheres was essential to making us believe over the course of nine seasons, his gripping tone of supernatural sci-fi conspiracy spreading like black oil across two feature films and X spin-offs like MILLENNIUM and THE LONE GUNMEN. Yet somehow, there’s been no real release of the haunting soundtracks which started it all, a fact which has now been more than rectified by La La Land’s multi-hour, four-disc release of Snow’s greatest cuts from the FILES.

As a prolific, television composer, Mark Snow had been doing far lighter stuff like THE LOVE BOAT, HART TO HART and FALCON CREST before getting in touch with his dark side for X-FILES. With shows varying between evil E.T. mythology to self-contained mutants and monsters-of-the-week, Snow resourcefully used synths and samples to create mesmerizing scores full of percussion, experimental soundscapes, frenzied action, ghostly voices, solemn piano solos and an overarching sense of melancholy to play its odd couple agents’ increasing angst at being plunged deeper into a well of evil that not only threatened them, but the existence of humanity.

At its strongest, Snows’ haunting X-FILES scores are about this unceasing struggle between the light and the very dark, where normalcy breaks down and the uncanny reigns supreme, ersatz horror scoring with an unexpected spiritual light that makes these scores’ unrelenting tension more than bearable to listen to. Further enervating the FILES’ hypnotic doom and gloom are the ways Snow breaks musical character, from the circus music of “The Post-Modern Prometheus” to the spooky-ooky organs and harpsichords of “How the Ghosts Stole Christmas” and the loopy jingle that brings us to “Hollywood A.D.,” with its way over the top zombie music- outside the fear box stylings that provide some of this set’s cleverest moments.

FILES fans have been waiting for a series-spanning score collection like this since The Cigarette-Smoking Man covered up his first piece of extra-terrestrial evidence, and the choice cuts here don’t disappoint. Snow and La La Land certainly had a formidable amount of Emmy-worthy music to go through, and what they’ve assembled from 40 of the 202 episodes he scored has a true musical flow to it, nicely balancing the show’s more emo scoring with Snow’s chillingly amorphous music for the always-ungraspable nature of the X-villains.