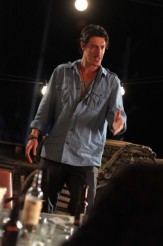 Based very loosely on Stephen King’s novella THE COLORADO KID, Syfy’s series HAVEN is now airing its second season Friday nights at 10 PM. The title enclave is a small town in coastal Maine where most of the residents are a bit more than human. FBI Special Agent Audrey Parker (Emily Rose) came to Haven in the first episode to investigate a murder, but has stayed on to look into various strange events, including the town’s ties to her own past. One of the few people Audrey meets who doesn’t seem to have some sort of supernatural ability is Eric Crocker’s character Duke Crocker.

Los Angeles native Balfour has done a few other science-fiction/horror projects – the remake of TEXAS CHAINSAW MASSACRE, VERITAS: THE QUEST, BUFFY THE VAMPIRE SLAYER, SKYLINE and playing Jesus in SAVING GRACE – but his credits cover a whole range of genres, including work in 24, CONVICTION and WHAT WOMEN WANT. He also recently made his directorial debut with the “Duccio’s Madonna” segment of the indie anthology DO NOT DISTURB and is now in development with that film’s producer Mali Elfman on an adaptation of JESUS HATES ZOMBIES.

Speaking by phone from HAVEN’s Nova Scotia location, Balfour tells us about Duke.

ASSIGNMENT X: So you’re filming out at the far eastern edge of the North American continent?

ERIC BALFOUR: Yeah. It’s a fascinating place out here. Fortunately, [the cold] is no longer unbearable, but it’s been raining every day straight for about three-and-a-half weeks now. It’s been a little difficult to predict [the shooting schedule] the last couple days.

AX: It seems that everybody in HAVEN – both the series and the town – has some sort of supernatural endowment, but do we know what Duke’s is yet?

BALFOUR: Actually, he is human. Some of the characters in the world of HAVEN have supernatural afflictions. Until recently, it was a safe zone for people with supernatural curses or afflictions or what have you. People for generations have come here in hopes of relinquishing whatever that thing was that inhabited them. Some of those curses may not necessarily be bad things – they may be things that they can’t control – but when the series started, for whatever reason, the veil of protection lifted off this town and it became, as it were, a Molotov cocktail of the supernatural.

My character grew up in the town and left for a long time. He’s sort of a modern-day pirate. He’s a smuggler and a con man and he came back to this town because it was very good at keeping its secrets. It’s a good place for him to operate out of. As the show has gone on, we’re going to see in Season Two, his motivations changed. He had an occurrence in the first season where he basically found out how he was going to die, because of one of the characters from last season’s psychic abilities to show people how they will die, and now that he knows and has this information, like any good con man, he’s trying to con his way out of his own death. So a big part of my character’s storyline this season is trying to figure out how to cheat death. Duke at this point – we don’t know of any affliction that he has, but given the rules of the world, people’s afflictions are brought on and manifest in different times in different ways. Usually, they’re brought on by some form of traumatic experience or trauma or pain and that’s what triggers it to manifest. That hasn’t happened yet to Duke, and it appears as if he doesn’t have one, but you never know in HAVEN.

AX: If Duke does turn out to have a supernatural quality, do you have something you would like it to be?

BALFOUR: If Duke was [immortal], almost like a Highlander and could come back in different incarnations – it’s almost plausible, because we always talk about the character as having this sort of other-time-period feel. He never felt like he was quite of this time period. He always has sort of this swashbuckling pirate mentality. You hear people saying, “I should have been around in the Twenties or Thirties” or whatever. You get that feeling from Duke, that he’s from a different time.

AX: Well, the other HAVEN characters appear matter-of-factly, but whenever Duke comes on the scene, it’s almost like there’s a little tonal flourish in the way he’s presented.

BALFOUR: Yeah, there certainly is, and it is on purpose. His function in the show in a lot of ways is to be the devil’s advocate, and to always question the reality. In some ways, they do it with a lot of humor, which is fun. He certainly does not adhere to the rules of the world very well.

AX: How is it working on the second season?

BALFOUR: You know, it’s always a great feeling when you come back for a second or third season of a show, because the beautiful part about playing a character on a television show is that in some ways, it’s a little bit more like theatre. You get to see a character through a longer evolution. Unlike with a movie, which usually has a very clear beginning, middle and end, a character on a television show is constantly evolving throughout the seasons, so from that standpoint, it’s really exciting. Also the camaraderie of the cast and crew and the family that’s built between you is a good feeling. It’s always fun to improve. You always hope that as you grow, as a cast and as a show, you’re always improving. So that part’s really gratifying.

AX: Are you guys the only game in town as far as television production in Nova Scotia?

BALFOUR: Yeah, pretty much. There are other productions that come here, but right now, we are it. The community out here where we shoot in Nova Scotia has embraced us tremendously – they’ve been really generous and kind. It’s odd at times, because we are living and working in this little fishing village. It’s a very small town and everyone knows each other, and so you very much become part of the fabric of the town. It’s interesting, because in some ways, people see you as this entity on television and sometimes they’re a little nervous to approach you, but for us, the fun part is becoming a part of this town and becoming part of the community.