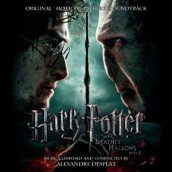 Alexandre Desplat ends the saga's scores on a high note

Alexandre Desplat is back in the HARRY house to weave his musical spell with HARRY POTTER AND THE DEATHLY HALLOWS PART 2. But if things seemed more than a bit wispy and time-biding after the last two POTTERS, nothing will prepare you for this literally smashing wrap up, especially with a spectacular musical finish that brings John Williams’ spirit back to the Halls of Hogwarts like never before.

Having impressed with the epic franchise fantasy scores for THE GOLDEN COMPASS and THE TWILIGHT SAGA: NEW MOON, Desplat thankfully raises the scoring stakes with his second POTTER big time, his brew of sorcerous menace and desperate, bold heroism immediately returning listeners to the musical enchantment that filled the best entries in the series.

Ever since his American breakout score for BIRTH, Desplat has brought a unique Gallic lyricism to even his most multiplex of scores, a poignance that makes this POTTER especially remarkable for giving heart to its truly harrowing danger. For at the center of the raging battles between good and absolute evil, Desplat’s melodic compassion is always there for the bond of this beloved trio, making the fearsomeness of the toweringly dark, cliffhanging action they’re thrown into all the more emotionally affecting, especially as Deplat’s mournfully percussive music becomes the only thing heard during some of the finale’s cataclysmic battle. For as much as Desplat’s throttling, choral and brass action delivers on the spectacle, it’s the near-religious poignance which graces the score which gives ultimate meaning to the numerous sacrifices within, especially with a ghostly female voice that tells us many of our most beloved friends will only be making out of this finale in spirit only.

Any soundtrack for the finale to a genre epic that’s worth its salt is wise to acknowledge its musical ancestors. And while Desplat has a surfeit of great themes, he’s also sure to dexterously weave the iconic melodies that John Williams first conjured for POTTER, Credit for ensuring that Williams’ smooth, melodic vibrancy touches all of HALLOWS’ score can be squarely given to orchestrator Conrad Pope (with an able assist by Clifford J. Tasner), who was on board since Williams’ first Quidditch match. And while the HALLOWS soundtrack has got to be about Desplat’s music (even given a 72-minute running time that barely grabs at the enormity of the score), it’s a measure of his humility as to how effectively Williams’ original music is used here- from the burst of his main theme as Harry makes it back to school, to the original’s climactic train departure cue “Leaving Hogwarts,” which becomes the signature for a new generation of students. It’s a stunningly apropos reprise that brings all of the POTTER scores full circle, and the final, thoughtful sparkle that takes the series out on the highest note of all.

AGREE? DISAGREE? LET YOUR VOICE BE HEARD – COMMENT BELOW
Click on link: To buy the HARRY POTTER AND THE DEATHLY HALLOWS PART 2 soundtrack